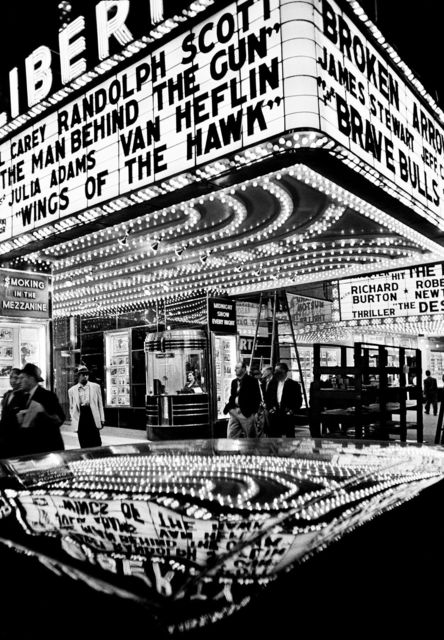 Purchased with funding from the State of New York. Percent of Art Program, 2003.

Using traditional painting techniques in his photography, William Klein intimately documented his hometown of New York City through a frenzy of photographs exhibiting daily life on the streets and avenues that grid the city’s boroughs. Compiled in his prize winning book, ‘New York,’ his photos, both journalistic and romantic, dare to show New York as an unpolished and congested blur of people and venues. Wings of the Hawk, 42nd Street, New York shows a night in front of the Liberty, a Beaux-Arts style Broadway theater turned picture house. As time went on, the Liberty became dedicated to more mature content. Times Square in the mid to late 1950s is well described in John Rechy’s City of Night as anarchy that excites the nameless narrator. Klein’s photograph is essentially a still image from the book: the lights of the marquee are seductively reflected off the body of the gleaming car, almost leading the viewer into the theater, coyly past the loitering man at the entrance.