Through this attraction, the viewer will experience different lows and highs throughout the lives of the Kardashians and endure the different ways that they have been perceived throughout their journey. 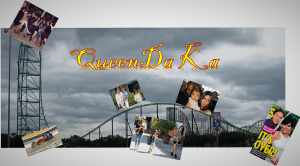 A roller coaster that works completely indoors which that takes you through twists/turns and ups/downs through various distorted versions of universes. You never know what the next turn will be. Essentially it serves as a true reflection of life and the random scenarios that you may encounter. It challenges your perception of the wild ride you embark on in the rollercoaster and makes you think about how you can never be certain about your specific identity since it is always open to changing. It may also challenge you to maintain a certain image in order to make sure that you are perceived in a specific way regardless of all of the personal issues that you might be experiencing.

Awesome by Kanye West was inspired by Kim Kardashian. He sings and tells a story in which he speaks about why Kim shouldn’t be caring about what anybody else has to say about her. He undermines the ideology behind perception, claiming that as long as she is the most important thing to him, she should not be worrying about what anyone has to say nor whether or not she is perceived negatively by many. Regardless of the image that she portrays to the public, he reinsures her that she is still perfect the way she is and has to continue to live her life.

This challenges our theme of reality vs fantasy because Kanye is challenging the opinion of the public eye (reality) with how he thinks that Kim Kardashian should be feeling regardless (fantasy).

In addition to Washington’s presidency, his wife’s fortune put him into the top statuses of Virginia planters. He went through many different phases in his lifetime which put him front and center of the spotlight. Because of the changes that he experienced with the presidency and marriage to his economically established wife, his slaves were considered to be members of his own “family.” This creates an abstract reality because of the way that slaves were tried to be portrayed as if they were treated as equal family members.