This home on a quiet side street in Forest Hills, Queens, was the first office of the Chinese-American Times, a Chinese American paper that published completely in English.

The founder and editor of the paper was William Yukon Chang (鄭玉安), a Chinese American from Hawaii who graduated from St. John’s University in Shanghai. After college, he worked for the Republic of China’s news agency and the popular English-language China Press. As the Chinese civil war raged, Chang returned to the U.S. and earned an M.A. in education from New York University. He began publishing the CAT (as it became known) in 1955.

The CAT was unusual for a number of reasons. First, no other Chinese American newspaper at that time published entirely in English, the language of the American-born second-generation. Second, Chang initially operated the newspaper not from Chinatown but from Forest Hills, Queens, a growing center for middle-class Chinese Americans in the 1950s and 1960s. Chang himself wrote and edited almost all the CAT’s content, and after picking up the newest edition of the CAT from a printer in Manhattan, he and his family folded the newspaper and prepared it for mailing to subscribers.

Unlike many other publications serving Chinese American New Yorkers, the CAT was an independent paper at a time when most other journals in the community functioned as mouthpieces for Chinese political parties and factions. Only one other newspaper, the United Journal (聯合日報), and two magazines, the Chinese-American Weekly (中美周報), and the China Post Weekly (大華旬刊), were independent, while three daily newspapers in New York represented various factions of the Kuomintang: the Chinese Journal (美洲日報), the China Tribune (華美日報), and the Chinese Nationalist Daily (民氣日報). Less overtly, Communist Party members had helped found the leftist China Daily News (美洲華僑日報) in 1940. 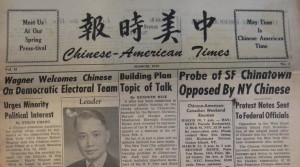 By focusing on community betterment and staying politically neutral, William Yukon Chang kept his newspaper going until the early 1970s. By that point, many in the English-speaking second generation had moved out of New York City, as so many people did during this period. Because of the Immigration Act of 1965, thousands of new Chinese immigrants–at the time mostly from Hong Kong, Taiwan, and Southeast Asia–were making New York their home, but they sought Chinese-language papers rather than English ones. And by the early 1970s, Chang had been writing, editing, and publishing the paper for almost two decades, so he eventually decided to end the CAT’s run.

Sources for this post include Dallas Chang, daughter of William Yukon Chang, and the Chinese-American Times.

This entry was posted in Chinese Americans, Queens. Bookmark the permalink.