This fairly ordinary building once served as the office of Sing Kee, also known as Sing Kee  Low (劉成基). 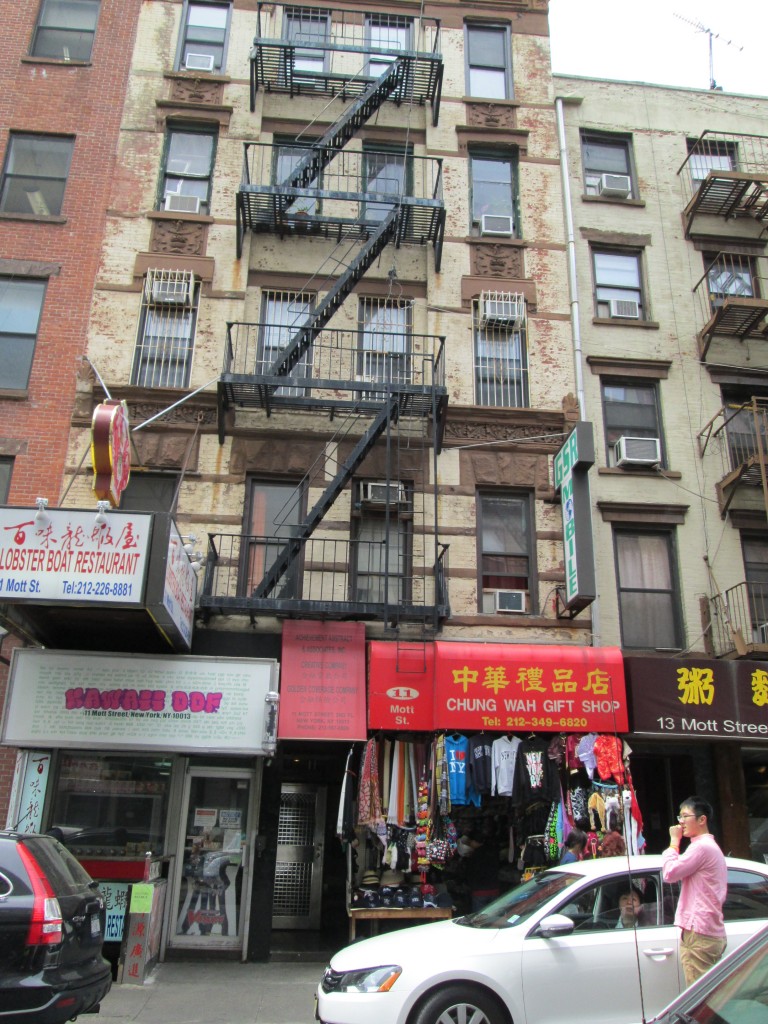 Sing Kee was a native of San Jose, California, and moved to New York at some point in the 1910s. During World War One, he served in the U.S. Army and won a Distinguished Service Cross for heroism. Returning to the U.S., he encountered many of the obstacles that American-born people of Chinese ancestry commonly faced during this era. China-born merchants dominated the Chinese American community of New York and often viewed native-born men like Sing Kee with disdain. Outside the Chinese community, however, Sing Kee faced even greater hurdles as a result of racial discrimination.

Like a number of other native-born men, Sing Kee eventually found work as an interpreter for the Immigration Service. The position epitomized the opportunities and limitations that Chinese American citizens encountered, for Sing Kee earned his living from serving a government agency that many in his community both feared and hated. At the same time, job opportunities for Chinese American men were so few that the Immigration Service job was a coveted one.

By the early 1930s, Sing Kee had quit the service and started working instead as a restaurant manager in Chinatown. Like many restaurant managers, he joined the On Leong Tong (later known as the On Leong Merchants’ Association), an influential tong involved in both aboveboard and illegal activities, such as gambling. Perhaps unsurprisingly, several American-born On Leong men served as Tammany Hall’s leaders in Chinatown. For a number of years, this building at 11 Mott Street was not only Sing Kee’s office but also the headquarters of the Chinatown Democrats.

By the 1940s, Sing Kee had become an immigration broker and travel agent. He used his knowledge of immigration policies to help Chinese immigrants travel to and from the United States, despite the very draconian laws (including, but not limited to, the Chinese Exclusion Act of 1882) meant to keep them out. Many of Sing Kee’s clients were “paper sons” who purchased identities that allowed them to immigrate to the U.S. During the federal government’s 1956 probe of Chinese illegal immigration, investigators portrayed Sing Kee as the kingpin of an East Coast immigration “racket” and argued that he knew he was helping paper sons enter the US unlawfully..

The truth was much more complex. Sing Kee almost certainly knew that many of his clients were paper sons. At the same time, he understood that the immigration system was racially  discriminatory, and he also made a lot of money helping undermine it (although not nearly as much as federal prosecutors contended). Eventually, Sing Kee was found guilty and served two years in prison, despite his reputation as a pillar of the community and a war hero.

Sources for this post include Y.K. Chu, Meiguo Huaqiao Kaishi (History of the Chinese People in America) (New York: China Times, 1975); the New York Times; and the National Archives and Records Administration.