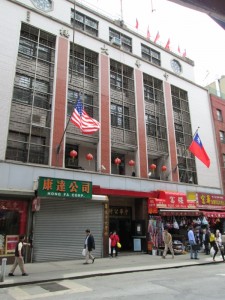 This building at 62 Mott Street is the Zhonghua Dalou/中華大樓 (the best translation is probably the “China Tower”) and houses the Chinese Community Center and the headquarters of the Chinese Consolidated Benevolent Association of New York (CCBA-NY).

The structure itself dates to the late 1950s and is thus fairly new by Chinatown standards, but its construction and the controversy surrounding it reflect a great deal about the CCBA-NY, one of the oldest Chinese American organizations in New York.

In the mid-19th century, Chinese immigrant merchants in San Francisco created the first Chinese Consolidated Benevolent Association (中華總會館), which also became known as the Chinese Six Companies. It was essentially an umbrella organization of groups that represented Chinese immigrants from different counties and districts of Guangdong’s Pearl River Delta, the home region of almost every Chinese in America at that time.

The Six Companies became a sort of informal government of San Francisco’s Chinese community, settling intracommunity disputes and negotiating with American officials. It also kept attorneys on retainer to fight for the rights of Chinese Americans, who faced tremendous racism and discrimination in the United States. The CCBA not only challenged American officials’ attempts to prevent Chinese from entering the US but also fought discriminatory laws aimed specifically at Chinese already living there.The CCBA paid for its activities through levying fees on every member of the Chinese American community, despite the fact that its board members and chairmen all came from the merchant elite in a heavily working-class community.

These class disparities were also readily apparent in New York, where leading merchants created the Chinese Consolidated Benevolent Association of New York (紐約中華公所) in 1883. The leaders of a few dozen organizations (the number grew over time) met every two years to elect the CCBA-NY’s chairman and secretaries, but ordinary Chinese Americans had no say in these elections.

By the 1920s, the CCBA-NY no longer fought for Chinese American civil rights in the courts, but it continued to collect a variety of fees from every Chinese in the city and all the Chinese-owned businesses as well. Under CCBA-NY bylaws, officers in the organization collected a percentage of these fees for themselves, so competition for the positions was fierce. Interested men (women weren’t eligible to be leaders in the CCBA-NY) bribed the heads of the CCBA-NY constituent organizations to vote for them, spending hundreds and sometimes thousands of dollars in the process. Community disgust with these elections and the CCBA-NY’s greed in the midst of the Great Depression eventually prompted challenges from other organizations, such as the Chinese Hand Laundry Alliance, which refused to pay CCBA-NY fees or follow the umbrella group’s leadership.

By the 1930s, the Chinese Nationalist Party, the Kuomintang (KMT/國民黨), which controlled the government of the Republic of China, began dispatching trained operatives to New York City to infiltrate and take over community organizations.

Three such men–Woodrow Chan (陳中海), Kock Gee Lee (李覺之), and Shing Tai Liang (梁聲泰)–served as chairmen of the CCBA-NY between 1948 and 1960. During this period, the US government continued to support the Republic of China on Taiwan, despite the fact that the Chinese Communist Party fought and won a civil war against the KMT and established the People’s Republic of China (PRC) on the mainland in 1949. Determined to preserve vital American support for the Republic of China, KMT leaders like Liang, Lee, and Chan collaborated with US government officials to hound out leftists in the New York Chinese American community. They also used the CCBA-NY chairmanship to conduct intraparty factional struggles (sometimes against each other), further diminishing the CCBA-NY’s prestige.

The China Tower was central to these disputes. The CCBA-NY first bought the land at 62 Mott Street in the late 1930s for a future headquarters and community center. But the group never had enough money to actually start construction on the building until the late 1950s. CCBA-NY skeptics in the community pointed out that the CCBA-NY’s extended and sometimes incompetent planning procedures ate up precious money. Gadfly journalist Y.K. Chu alleged that Shing Tai Liang’s mismanagement of the building process even drove the CCBA-NY into bankruptcy at one point. The organization cut corners to get the building done, and then it sued the contractor. During the construction, Woodrow Chan also sued Shing Tai Liang over money the CCBA-NY owed him…and on and on.

The CCBA-NY did finally finish the China Tower, which opened in 1962, but not without substantial blows to its prestige. KMT members continued to control the CCBA-NY chairmanship into the 1970s, but liberal and leftist community activists increasingly challenged the organization’s position. Today, with different immigration laws and official US recognition of the PRC, the CCBA-NY has become far more community service-oriented than it was in the mid-20th century. However, in addition to the US flag, the CCBA-NY still flies the flag of the Republic of China on Taiwan, signaling its rejection of the PRC.