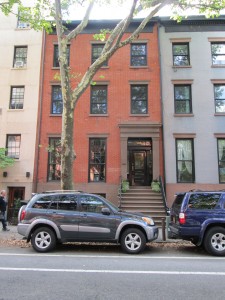 I’ve discussed resettlement in New York City in a previous post about the newspapers the Japanese Times and Japanese American News. But while most Japanese American businesses and organizations were located in Manhattan, scores of resettlers from the western camps stayed temporarily in the Brooklyn Heights hostel.

A cooperative project of the pacifist Church of the Brethren and the American Baptist Home Mission Society, the hostel was under the management of Ralph Smeltzer, a Brethren leader who had opened a similar facility in Chicago in 1943. During World War Two, the migration of Americans into major urban areas created an incredible shortage of housing, particularly for people of color who already encountered ferocious discrimination when they sought homes and apartments. Church organizations like Smeltzer’s, in cooperation with the War Relocation Authority, opened hostels in order to make resettlement outside the concentration camps possible.

A onetime fraternity house, the proposed hostel encountered considerable opposition from neighbors and others in New York who viewed Japanese Americans as disloyal security threats and potential saboteurs. At the same time, Catholic, Jewish, Protestant, and local social service organizations worked with the hostel’s managers to ease the facility’s reception. Between May 1944, when the hostel opened, and the end of World War Two, hundreds of resettlers passed through the Brooklyn Heights facility.

Some years after the conflict, 168 Clinton became ordinary apartment housing for renters and, eventually, co-op owners. It remains a co-op today.

Sources for this post include The New York Times.

This entry was posted in Brooklyn, Japanese Americans. Bookmark the permalink.