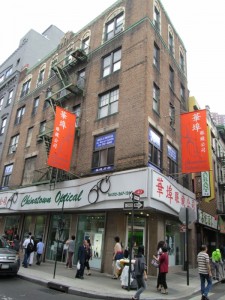 This fairly nondescript 19th-century building at the corner of Mott and Pell Streets in New York’s Chinatown once housed the brokerage business of James Waye “Shavey” Lee and James Yip Typond.

Shavey Lee (李振輝) was by far the more flamboyant of the two men. Born and raised in New York, he grew up in Chinatown and earned his nickname because his father shaved his head in the summer to keep the boy cool. By the late 1930s, the jovial, rotund, cigar-smoking Shavey had become a sort of local celebrity whom journalists often referred to as the “Mayor of Chinatown.” Lee’s younger sister, Emily Lee Shek, also led a remarkable life, even serving in the Women’s Army Corps (WAC) and the OSS during World War Two. At one point, she set up a recruiting station for Chinese American WACs in Shavey’s office.

Shavey Lee and James Typond exploited Shavey’s fame when they opened “Tung-Sai,” a restaurant near City Hall that became known simply as “Shavey Lee’s.” It attracted politicians and celebrities alike and remained a fixture in Chinatown until the 1970s.

James Typond (葉榮進), Lee’s low profile business partner, avoided the limelight that Shavey craved. Like Shavey Lee, Typond was also a native New Yorker; the son of Yip Typond, a China-born rice merchant, he followed his father’s practice of using “Typond,” the older man’s first name, as a surname; after all, that’s what white neighbors and business associates assumed it was.

In addition to running a restaurant, Lee and Typond made their money “fixing” license and insurance problems for the many Chinese-born laundrymen and restaurant owners in midcentury New York. Most such people (almost all of whom were men) could not speak English well enough to navigate the various agencies whose approval they needed for their businesses. Typond and Lee took care of such matters for a fee and sold insurance as well.

The partners prospered not only by meeting a need in their community but also by participating in politics. Despite the efforts of reformers, most city agencies until the 1960s contained numerous appointees connected to Tammany Hall, the Democratic political machine. Similar machines controlled Democratic politics in Brooklyn, the Bronx, and Queens. Lee and Typond were active Democrats whose ties to the Manhattan and Brooklyn machines made their brokerage business possible and profitable.

The two men were also involved in some of the less savory aspects of Democratic politics within New York City as a whole and inside the Chinese American community. Typond delivered bribes for a Brooklyn assemblyman for several years and secured a job for his brother-in-law in the same assemblyman’s office. Shavey Lee was a member of the On Leong Tong (or On Leong Merchants Association), a group linked to gambling and other illicit businesses–and also to Tammany. Such ties helped Shavey’s younger brother Thomas H. Lee (李鴻輝) become the first Chinese American assistant US attorney in New York; in 1951, the younger Lee received Tammany’s backing for the position.

Shavey Lee died of a heart attack in 1955, leaving Typond to run the partners’ businesses. In the 1960s, Typond became more active in the Chinatown community, helping develop housing and improve tourism infrastructure. Typond also remained an ardent Democrat, chartering the Chinatown Democratic Club in 1956 and leading a voter registration drive in the early 1960s. (Coincidentally, he was sort of a father figure to Robert S. Bennett, who grew up in the house next door to Typond’s and who later became President Bill Clinton’s attorney during the Monica Lewinsky scandal.) However, Tammany’s demise and the decline of machine politics in Manhattan eroded Typond’s influence in the local party. He died in 1988.

Sources for this post include Robert S. Bennett, In the Ring: The Trials of a Washington Lawyer, the New York Times, Bruce Hall, Tea that Burns, and 紐約華僑社會. Note: the website of the Chinese Consolidated Benevolent Association of New York City erroneously identifies one of the group’s past chairmen as Shavey Lee. The man in question was actually a different person, Kock Gee Lee (李覺之), a China-born journalist who served his second term as chairman after Shavey Lee’s death.