This simple brownstone at 28 East 20th Street in Manhattan is a replica of the original building that once occupied the same site. That townhouse was the birthplace of Theodore Roosevelt, the twenty-sixth president of the United States. 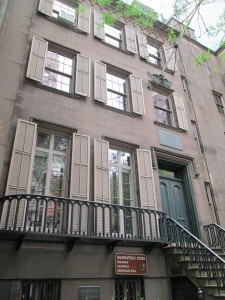 TR was certainly not Asian American, but he played important roles in several key moments of Asian American history. For example, at the beginning of the Spanish-American War, he resigned his position as assistant secretary of the Navy to form and fight with the Rough Riders cavalry unit in a war that ultimately made the Philippines an American colony–and began Filipino migration to the US mainland. And his actions as president directly shaped the experiences of two major Asian American groups: Japanese Americans and Korean Americans.

In 1905, TR helped negotiate an end to the Russo-Japanese War then taking place in northeast Asia. At the time, several thousand Korean immigrants lived in the Territory of Hawaii and on the US West Coast, and they petitioned TR to defend Korea’s independence and territorial integrity, particularly from Japan. Two Koreans (including future South Korean president Syngman Rhee) also met with TR at his home, Sagamore Hill, in Oyster Bay, Long Island, to plead their country’s cause.

Little did any of the Koreans know that TR had secretly agreed to allow Japan to annex Korea, which became an official Japanese colony in 1910. Roosevelt admired the rise of modern Japan and also believed that Japanese domination of Korea would ensure reciprocal support for continued American occupation of the Philippines.

Regardless of TR’s motives, the Japanese annexation of Korea not only caused great unrest there but also helped fuel the Korean independence movement, which flourished both on the West Coast and Hawaii, and in China and Siberia.

About seven months after TR negotiated the 1905 Treaty of Portsmouth, ending the Russo-Japanese War, an earthquake and subsequent fire destroyed much of San Francisco, a city that had attracted significant Japanese immigration since the 1890s. During the rebuilding process, the San Francisco Board of Education mandated that Japanese American students would have to attend the segregated Oriental School, located in Chinatown. The city had long segregated Chinese American students, but Japanese American kids studied in integrated schools before the quake. The Board’s move was an overtly and unapologetically racist response to growing Japanese immigration to the West Coast. And it not only angered Japanese immigrant parents but provoked an international incident with Japan.

Unwilling to risk war with the rising Pacific power, TR negotiated with Japanese officials and with authorities in California. The result was the Gentlemen’s Agreement of 1907, in which San Francisco allowed Japanese American children to attend integrated schools, while the Japanese government no longer issued passports to male laborers hoping to immigrate to the US (although Japanese men already in the US could still bring their wives and children to join them). More quietly, TR issued an executive order barring Japanese immigrants living in the Territory of Hawaii (a magnet for Japanese immigration) from moving to the US mainland.

The Gentlemen’s Agreement averted an international crisis, but it did not satisfy California’s white supremacists, who continued to organize against Japanese Americans. The Agreement also reflected the power hierarchy that TR himself helped create. Chinese American children remained segregated in the Oriental School, but now they were joined by San Francisco’s handful of Korean American kids. Japan might claim Korea, but it did little to protect Koreans abroad–and the Gentlemen’s Agreement did not include them.

Sources for this post include Richard S. Kim, The Quest for Statehood: Korean Immigrant Nationalism and U.S. Sovereignty, 1905-1945; New York Times; and the files of the Survey of Race Relations on the Pacific Coast, Hoover Institution.