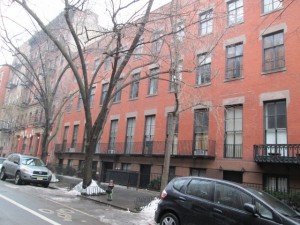 This fairly simple turn-of-the-century walk-up building was once the home of author Younghill Kang, who most likely wrote some of his early works, including The Grass Roof and The Happy Grove, while living here. Nicknamed the “St. Mark’s Garth” for its backyard garden, the building belonged to the historic St. Mark’s Church-in-the-Bowery, making it even more important to Asian American history. The St. Mark’s church, which is just down the block, contains a graveyard with the remains not only of Peter Stuyvesant but also Commodore Matthew Perry, the American naval commander who forced Japan to open to the West in 1854. Japanese immigration to Hawaii and the United States began just a few decades later.

Largely forgotten until recent years, Younghill Kang was an Asian American literary pioneer. Born in Korea in 1903, he grew up as Japan tightened its grip on the kingdom and then made it a Japanese colony. Kang, who hated the Japanese occupiers, became deeply interested in the West. Leaving Korea in 1921 with just a few dollars in his pocket, he ended up in Boston, where he abandoned plans to study medicine and instead turned to literature. He eventually worked his way through Boston University and Harvard.

In 1929, Kang married Frances Stacy Keely, a Wellesley graduate who encouraged him to write in English, and the two moved to New York. There, Kang worked for Encyclopedia Britannica and lectured at New York University while writing his autobiography, The Grass Roof. Frances Kang listed the 111 E 10th as her home address when she filed for naturalization in 1933. Although born in West Virginia, she lost her American citizenship for marrying Kang. Asian immigrants were legally ineligible for American citizenship at that time, and American women who married them lost their citizenship too. A 1931 revision to the law enabled Frances Kang to regain her American citizenship.

During the period the Kangs lived at 111 East 10th, their neighbors included a number of artists, writers, and similar residents drawn to the building because of its reasonable rents and intellectual community. In fact, the liberal Episcopalians who purchased the building hoped to attract just such people, whom they felt were often “unchurched.”

Despite this congenial environment, the Kangs did not stay long. In 1933, Younghill Kang received a Guggenheim Fellowship, and he and his family (which now included daughter Lucy Lynn Kang) set sail for Europe. When they returned, the Kangs moved to Long Island for Younghill Kang’s new job at Hofstra. Soon after, one hundred of Younghill Kang’s fellow educators successfully pushed the House Committee on Citizenship to consider a private bill granting him U.S. citizenship. Congress granted citizenship to Kang in 1940–twelve years before Korean immigrants as a whole could become American citizens.

During World War Two, Kang served as an adviser to the US military. He and Frances Kang also collaborated on translations of Korean literature, while he wrote articles for the magazine Common Ground and worked for the Metropolitan Museum of Art. Still, despite spending considerable time in Manhattan, the Kang family never moved back to the city. Frances Keely Kang died in 1970 and Younghill Kang in 1972. By then, few readers remembered Kang’s early work anymore. Fortunately, in recent years Asian American literary scholars have rediscovered The Grass Roof and Kang’s other books

Sources for this post include the Smithsonian Institution, the New York Herald-Tribune, the New York Times, The WPA Guide to New York City, Frances Kang’s naturalization records, The Constructive Quarterly, and Newsday.

This entry was posted in Korean Americans, Manhattan. Bookmark the permalink.