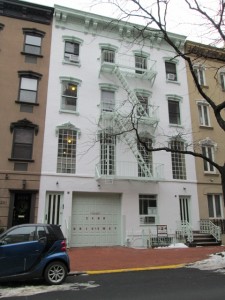 This 19th century tenement building at 223-225 E 31st Street once housed New York City’s first Chinese Protestant congregation under the leadership of the Rev. Huie Kin (許芹). An immigrant from Toishan, Guangdong, he arrived in America in 1868 and worked at various jobs in the Bay Area. An employer there helped him learn to read and write English and introduced him to Christianity. Huie later entered the Lane Theological Seminary and in 1885 moved to New York to participate in the Presbyterian Church’s efforts among Chinese immigrants. The church had begun its mission in 1868, but Huie was the first Chinese to lead it.

Huie experienced considerable challenges as he sought to minister to the community and to convert Chinese to Christianity. In his Reminiscences, which he published in 1932, he recalled trying to eradicate prostitution and gambling from late 19th century Chinatown; the crusade resulted in threats on his life. He also attracted unfavorable attention by marrying Louise Van Arnum, a white woman and mission volunteer. Chinese men in 19th century New York married or lived with white women far more often than they did in California, where an 1880 law banned interracial marriages between whites and Chinese. Still, such relationships were generally confined to working-class men and women, and contemporary observers could occasionally seem a bit obsessed with the Huies’ marriage; even Huie Kin’s obituary in the New York Times pointedly described his wife as a “descendant of one of the old Knickerbocker families of New York.” Huie himself put it this way: “there is such a thing as love at first sight….the fact that she was of another race made no difference to me.”

Christianity was a hard sell among the Chinese of turn of the century New York. Many community members associated the religion with Western imperialism at a time of growing nationalism in China and among the Chinese diaspora. In addition, white critics of the Chinese often referred to them as undesirable “heathens” and used religion as a justification for anti-Chinese laws. For a time, young Chinese men in New York flocked to Sunday schools for their free English lessons, but when one such student, Leon Ling, allegedly murdered a young white mission worker named Elsie Sigel in 1909, the result was an anti-Chinese backlash that Mary Lui aptly describes in her 2005 book The Chinatown Trunk Mystery.

The Sigel murder and the backlash undoubtedly worried Huie and other Presbyterian leaders, prompting them to move Huie’s church out of Chinatown. By 1909, Huie had built up a congregation of about one hundred fifty worshipers, and in 1910 the Presbytery of New York obtained the building at 223-225 E 31st Street, formerly home to the East Side Republican Club, for Huie’s congregation. The building included dormitories for young men; church leaders hoped such quarters would “keep Chinese away from the evil influences of Chinatown,” now associated with the Sigel killing.

Among those who may have visited the Huies at their new home above the church was Sun Yat-sen, the Cantonese revolutionary and founder of the Kuomintang who served as the first provisional president of the Republic of China in 1912. Sun visited the Huies in the summer of 1910, just as the new church was taking shape but right before it opened.

Huie Kin retired from the ministry in 1925, and in the summer of 1933 he and Louise Huie traveled to China to settle there. Unfortunately, Huie, long plagued by ill health, died in January of 1934. Louise Huie returned to the United States in 1935 and passed away in 1944. The Huies’ nine children carried on the family name and spirit, however. The six Huie daughters married Chinese students and moved to China, where they contributed to the nation’s development and where some family members remain today. The three Huie sons married American women and stayed in the United States. One of them, Irving Huie, became New York’s commissioner of public works and part of Mayor Fiorello Laguardia’s “War Cabinet.” Today, the far flung and diverse Huie family holds frequent reunions and maintains a website dedicated to its fascinating roots.

In 1948, Huie Kin’s old congregation, by then renamed the Huie Kin Memorial Presbyterian Church, announced plans to move; the church that had once sought to distance itself from Chinatown now relocated to Pearl Street in order to be more convenient to Chinese American worshipers. The building at 223-225 E 31st today houses a social services agency and apartments.

This entry was posted in Chinese Americans, Manhattan. Bookmark the permalink.