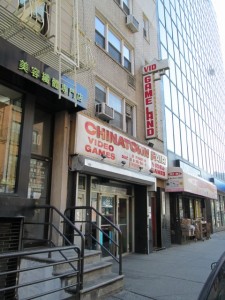 This very plain 20th century building occupies the site of an earlier structure at 4 Mott Street where Chinglun Frank William Lee (李錦綸) was born in 1884. The younger son of a Chinese immigrant father and a German American mother, Frank Lee was a true New Yorker, yet he eventually renounced his American citizenship and became a leading diplomat for the Republic of China.

As the historian Mary Lui has shown, many Chinese immigrant men in 19th century New York City married working class European immigrants and their second generation daughters. Since the Lees probably met and married in St. Louis, such relationships were probably not that unusual in other Eastern and Midwestern cities as well. (Chinese-white marriages were banned across the Pacific Coast, where anti-Chinese politicians were powerful.) But few of these Chinese men became quite as famous as Thomas Ling Lee, better known as Tom Lee, a restaurateur and leader of the powerful On Leong Tong in its early years in the city.

Tom Lee became a US citizen while living in St. Louis in 1876, but two years later, a circuit court in California forbade the naturalization of Chinese aliens. The court case and subsequent legislation essentially stripped Tom Lee and other Chinese immigrants of their citizenship, but outside the Pacific Coast, local officials often knew little about the anti-Chinese laws. After moving to New York, then, Lee continued to vote in local elections as a citizen until federal officials arrested him for such activities at the turn of the century. Lee also kept a steady stream of bribes flowing to Tammany and in return enjoyed police protection for the On Leong Tong’s various vice businesses.

Shortly after Frank Lee’s 1884 birth, the family moved from the building that housed Tom Lee’s restaurant at 4 Mott Street to the Upper West Side; eventually, they relocated to the Bronx, living at what today is the site of the Bronx House of Justice. After attending New York public schools, Frank Lee went on to study law at New York University and religion at the University of Chicago, where he embraced Christianity and decided to become a minister–much to his father’s dismay.

In 1908, Frank Lee took a position in Canton (Guangzhou), perhaps out of a desire to serve China–although there were few opportunities for Asian American minsters in the US at that time. Few integrated churches existed in this period; moreover, because of prevailing racial (and racist) views inside the major denominations and in the larger society, no church governing body would post a nonwhite minister to lead a majority white congregation. Whatever the reason, Lee felt a strong tie to his father’s homeland, throwing himself into his work at the Pui Ching Baptist Academy, a locally-supported school largely funded and run by Chinese Christians rather than missionaries. Lee probably became secretly involved around this time with the Tongmenghui (Revolutionary Alliance), an organization that Chinese revolutionary Sun Yat-set set up to overthrow the ruling Qing dynasty.

After China became a republic in 1912, Frank Lee, by then an open member of the new Kuomintang (KMT/Chinese Nationalist Party, which replaced the Tongmenghui)  worked both at Pui Ching and in the new provincial government’s Bureau of Foreign Affairs. He also publicly renounced his American citizenship and urged other Chinese Americans to do the same (few appear to have complied). Like other KMT members, Lee fled China in 1913, after President Yuan Shikai attempted to suppress the party and concentrate power in his own hands. During his exile, Frank Lee worked as a minister of a Chinese congregation in Chicago and then served Sun Yat-sen as a secretary during the revolutionary leader’s own exile. Lee returned to China after Yuan Shikai’s death and held a variety of posts under Sun and his patrons in Canton.

After the KMT unified much of China in 1927, Frank Lee became the new government’s first representative to the land of his birth, arriving in Washington in August 1927 to serve as China’s ambassador there. In the years that followed, he also held the posts of ambassador to Mexico, acting head of the KMT regime’s Ministry of Foreign Affairs, ambassador to Poland, and ambassador to Portugal. He also found time to teach an occasional class at Shanghai College. Little wonder that at points he submitted his resignation, complaining of fatigue and ill health; nevertheless, the government refused to let go of him. In 1943, he finally left his post in Portugal and traveled again to the United States, where after World War Two he served as an adviser to the Republic of China’s United Nations delegation. Following the communist revolution and the KMT’s retreat to Taiwan, Lee remained in the United States.

The revolution seems to have split Lee’s family and reduced his fortunes. One son, Frank Jr., apparently chose to stay on the mainland, where he lived for many years. And while Frank Lee escaped the narrowness of turn-of-the-century Chinatown to gain significant renown in China, the land he claimed for his own, he could never fully protect his family from the American racism he loathed. Because of the US government’s very restrictive policies on Chinese immigration, Lee’s daughter, Rose Lee Kingman, was detained and held for several days when she arrived in the United States in 1947. Despite Kingman’s father’s position as a government official, US immigration officials forced the Chinese government to post a bond for her release. After Frank Lee’s death in 1956, his wife Kuk Fong Lee ended up supporting herself as a salesperson at a New York Chinatown gift shop and as a seamstress in a Chinatown garment factory, all while her immigration status remained a matter of contention. For almost a decade, the Justice Department debated whether she qualified to stay in the US as a permanent resident, only settling the matter in her favor in 1965. Kuk Fong Lee died a few years later in the country her husband had rejected long before.

Sources for this post include Mary Lui, The Chinatown Trunk Mystery:Murder, Miscegenation, and Other Dangerous Encounters in Turn-of-the-Century New York City; Who’s Who in China; Ancestry.com; the China Press; the Canton Times; the Chinese Recorder; the New York Times, and 紐約華僑社會 (1950). I am also grateful to Gladys Astorga and Scott Seligman, who corrected the mistakes in the initial post about Frank and Tom Lee.