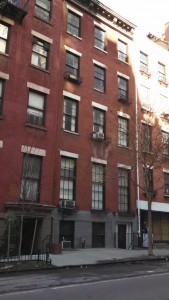 According to the website SidwaysNYC.com, “Dawn Powell, novelist and playwright; Marianne Moore, the Pulitzer prize-winning poet; Argentinean tango composer Astor Piazzolla; musician Jimi Hendrix; children’s author and illustrator Maurice Sendak; and Barbra Streisand all called 9th Street home at one point in their career.” One name that’s missing from that list is the artist Mine Okubo, who lived in this unobtrusive 19th century walk-up at 17 E 9th Street for several years in the mid-1940s.

Okubo is most well-known for her book Citizen 13660, a collection of illustrations she made while imprisoned in the Topaz Relocation Center, one of the camps in which the US government incarcerated the entire Japanese American population of the West Coast beginning in 1942.

In the 1930s, Okubo graduated from Riverside Junior College and the University of California, Berkeley, where she also received an MA in art. She then won a fellowship to travel to France and continue her art studies, but the 1939 outbreak of war in Europe forced her to return to the US. Back home, she worked for the Works Progress Administration’s art programs in San Francisco until war came to America as well.

Within a month of the December 7, 1941, Japanese attack on Pearl Harbor, white supremacists on the West Coast began calling for the imprisonment and postwar deportation of all people of Japanese ancestry in the United States. Political and civic leaders across the state and the nation showed little moral courage in the face of such racist harangues, instead encouraging and benefiting from such sentiments. One of these leaders was President Franklin Roosevelt, who on February 19, 1942, signed Executive Order 9066, authorizing military officials “to prescribe military areas in such places and of such extent as [they] may determine, from which any or all persons may be excluded.” The order said nothing about people of Japanese ancestry, but US military officials used it to bar all such people–120,000 in total–from the West Coast. Two-thirds of those excluded were American citizens whose government utterly failed to protect their constitutional rights.

Soon, Okubo and her brother Toku joined thousands of other Bay Area Japanese Americans forced to report to a “temporary assembly center” hastily created at the Tanforan horse racing track in San Bruno, California. Later, officials of the new War Relocation Authority assigned the two to the Topaz Camp in Utah, where they lived in harsh, spartan conditions with about nine thousand other Japanese Americans.

Mine Okubo documented life in the camps, sketching what she saw around her both at Tanforan and Topaz. Her illustrations, later published in the 1946 book Citizen 13660, portrayed the daily rigors, frustrations, and humor of the camps. When one of her drawings won a prize at a San Francisco art show, Fortune magazine began offering her assignments. By then, the War Relocation Authority was allowing some Japanese Americans to leave the camps and resettle in areas outside the Pacific Coast. Okubo took the opportunity to move to New York, where Fortune was located.

After arriving in New York, Okubo moved to 17 E 9th Street, where she lived while completing the work on Citizen 13660 and after its publication. Although Okubo enjoyed a long and productive art career, the book’s illustrations remain her best known work. Okubo eventually found another apartment, but she never moved away from New York, her adopted home. She died there in 2001, at age 88.

Sources for this post include Mine Okubo, Citizen 13660; the New York Times; DIscoverNikkei.org; Michi Nishiura Weglyn, Years of Infamy; John Tateishi, And Justice for All.

This entry was posted in Japanese Americans, Manhattan. Bookmark the permalink.