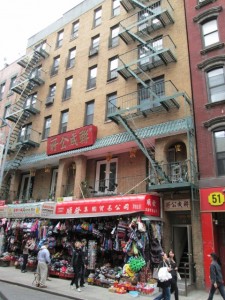 This simple 1915 building, located at 49 Mott Street in the heart of Chinatown, was constructed on the site of a notorious 19th century tenement house.  Since the mid-1920s, it has been the headquarters of the Lin Sing Association (聯成公所). Founded around 1900, the Lin Sings long represented Chinese New Yorkers from all parts of Guangdong except for Toishan, and one of their members still serves alternating terms with a member of the Ning Yung Association (which represents Toishanese) as Chinese Consolidated Benevolent Association (CCBA) of New York chairman.  Beginning in 1957,  however, another group called 49 Mott Street its home. Established in the wake of a 1956 federal crackdown on unlawful Chinese immigration, this organization was the National Chinese Welfare Council (NCWC/全華人福利總會), the first permanent national group supposedly dedicated to the rights of Chinese Americans.

Until 1979, the United States recognized the Republic of China (ROC) on Taiwan as the legitimate government of China, and the Taiwan-US alliance was especially strong in the 1950s. Still, despite requests from the regime of ROC leader Chiang Kai-shek, American officials pressed on with their immigration probe, calling into question the influence that Taiwan and its agents in the US actually wielded in Washington. Two leaders of New York’s CCBA (CCBA-NY), Shing Tai Liang and Kock Gee Lee, founded and shaped the NCWC in response to this unsettling situation. Liang was a Chinese government official who arrived in New York in 1947 to edit the Chinese Nationalist Party (Kuomintang) Chinese Journal, the New York mouthpiece of the Chiang Kai-shek faction of the party. Liang also served as New York’s CCBA chairman from 1952 to 1954 and 1956 to 1958. Lee, his successor and ally, came to the United States in the late 1920s or early 1930s as a merchant but spent all his time on KMT activities. By the mid-1940s, he worked on the Chinese Journal with Liang and served on the board of the Eastern US KMT. Lee chaired the New York CCBA from 1954 to 1956 and 1958 to 1960. Liang and Lee’s activities and influence suggest just how much power the Chiang regime wielded in New York’s Chinese community.

In early 1957, Liang secured the cooperation of other CCBA leaders around the country and convened a national conference of Chinese Americans that March. Although hardly representative of the Chinese American population, the conference and the group it created–the NCWC–were supposed to be nonpartisan and concerned with Chinese American domestic issues. Regardless, Shing Tai Liang and Kock Gee Lee kept the NCWC firmly under the Kuomintang’s control. The NCWC’s organizational and conference structure, which Liang had almost singlehandedly put into place, gave him and his New York allies a remarkable degree of power and influence in the group. Most of the NCWC leaders had close ties to the Nationalist regime, were KMT members, or both.

But the group was an utter failure as a lobbying organization. It only opened a Washington, DC, office in 1963, and its leaders appeared at just two congressional hearings–one of them because of a senator’s last-minute, offhand invitation. Furthermore, the organization quickly alienated many Chinese American centrists and liberals because of its inaction on domestic issues and its obvious focus on supporting the Kuomintang regime in Taiwan. Liang’s bald attempts to control the NCWC also angered many Chinese Americans. Although convinced to officially resign from the NCWC leadership in 1958, Liang still portrayed the Lin Sing Association, which he led, as the headquarters of the NCWC. He also continued to help run the NCWC through his friend and colleague, Kock Gee Lee, who served as its head in the 1960s.

Although it always claimed to be a civil rights group of sorts–some of its 1970s leaders even tried to compare it to the NAACP–the NCWC was essentially a Chinese Nationalist front organization. Many of its leaders simultaneously served as honorary members of the Taiwan legislature or as advisors to that government, and former staffers from the Republic of China’s embassy in Washington helped guide the NCWC too. Yet in reality, it was a tremendously ineffective front organization that seemingly existed to provide its leaders an aura of prestige.

Despite US recognition of the People’s Republic of China in 1979, the National Chinese Welfare Council sputtered along into the 1980s, issuing pronouncements about the need for the US government to support Taiwan. By the mid-1980s, some group leaders were working to make the NCWC more relevant by actually lobbying Congress for immigration reform, but other Chinese American organizations easily overshadowed the NCWC. By that point, the NCWC’s center of gravity had long since shifted to the southwest, away from New York, and the Lin Sing Association no longer displayed the group’s sign or acted as its national headquarters. Almost no one today remembers that 49 Mott Street was the location of the first national organization dedicated–at least in theory–to protecting Chinese American civil rights.