Posted on December 2, 2014 by aaronferrer

From undisclosed sketchy locations, ring card girls, booze and blood, the underground boxing scene has developed almost a cult following. Two leagues I have become aware of are Friday Night Throwdown, a 5 year old league that doubles as a party scene that just happens to have a boxing ring nearby, and the BX Fight Club, a relatively new upstart league, looking to promote boxing while encouraging people to not engage in violence and put the guns down.

However, Just who are these boxers, where did they come from, and why are they even involved in this form of boxing? One of the main attractions of FNT is a young man named Charlie Hammelstein, or simply know around these parts as “Rockstar Charlie.” He wasn’t always this underground fighter, in fact, he has experience in the Golden Gloves, an annual amateur competition where he caught the attention of a person from the underground. ” I was fighting in the Golden Gloves and then someone recognized me at a party, we hooked up and then I started fighting in the underground.” 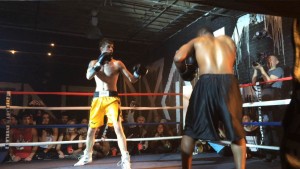 Charlie has fought on FNT since it began and has only lost one fight. But, in his short stint, he was successful in the Golden Gloves as well, “I made one final” Rockstar Charlie said,”The other two I made semifinals, one of them I lost, and one of them I had a job so I couldn’t do it.” He has also trained at well known gyms such as Mendez Boxing Gym, and Gleason, which he currently trains at now. He believes he will have a couple of professional fights before his career is over but he really wants to open up a gym, “I have a building in Soho, me and my friend are opening up a gym there.”

He is a newcomer on the scene, joining the BX fight Club around October and already making a name for himself, or being given one that is already taken I should say. Chris Cunningham AKA Manny Pacquiao, got involved through instagram and the rest is history. “Initially the first time I went there, I just went to check it out” Says “Pacquiao”,”but when I got there I felt the vibe and they told me I could just throw the gloves on, and everything went smooth sailing from there.”

It didn’t take long for the Queens fighter to build up some popularity and fight at FNT, a larger more distinguished league, where he would rematch his second fight at BX Fight Club against Harlem Fighter “Staxx.” “One of my friends who goes to BX fight club with me got a call, and he called me telling me that I got invited, another fight club is all about the experience.” The differences between the leagues are apparently to “Pacquiao”, “right off the bat, I could already tell it’s more of a party scene, it’s more music and liquor, I wouldn’t knock on the BX it just started, its more unprofessional, but the hype around it more than makes up for it.” 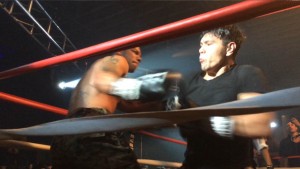 “Pacquiao” is also not someone who always wanted to pick up the boxing gloves, instead was rerouted from a different form of fighting, Muay Thai. “I learned all my boxing from Muay Thai, originally my style is Muy Thai, im picking off pieces from youtube, textbooks, and old trainers,” says Pacquiao,” if it was a Muy Thai bout over here I would feel a lot more confident.” He joked that he wished there was an underground Muay Thai league.

Both the BX Fight Club and FNT are hard leagues to gain access to if you don’t know someone involved in some form or fashion. If you would like to attend any of the events for these leagues try reaching out to a fighter or the league directly to inquire about locations and possible entrance fees.