El Barrio Gym on East 115th street, which is located on the 3rd floor of a 3 story building on top of a corner store, is the gym Malik Rodriguez, the Marine and boxer profiled in an earlier post, usually trains at. However, the gym is in a fight of its own to keep its doors open after a West African man by the name of Souleimane Konate, purchased the two floors above the deli from the landlord for almost $14,000. The marine still trains there but the question is for how long will he be able to before owner of the gym Jose Sanchez is forced to move out.

Rodriguez has found other ways to train as well, being resourceful and using what’s around him. On this rainy and windy day, he chose to train in a place he has trained before, on a dimly lit terrace in the Polo Grounds, a New York City housing project located across the street from the legendary street basketball court, Rucker Park. The location was originally Polo Grounds baseball stadium before it’s demolition in 1964. The fighter doesn’t train alone however, his uncle, a former boxer himself, Edwin “Bad Boy” Rodriguez, trains him. 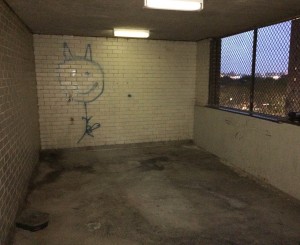 This day, there are no weights, no heavy bags, no speed bag, and his sparring partner was unable to make it. However, he had hand wraps, gloves, and pads to do pad work, which is where someone else holds up their hands strapped in these boxing pads in different angles to work on jabs, defensive maneuvers, body shots, right and left hooks, and many other techniques, more than enough to work on your craft. Rodriguez also shadow boxed, which is typically with no gloves or equipment and is done alone. This is a way to maintain rhythm, work on footwork, jabs, stamina, and figure out what needs to be fixed with your technique among other things.

His uncle held the pads low and told him to use both his left and right hand to uppercut quickly, but he stopped Rodriguez when he noticed he was not stepping into the punches, a common mistake among inexperienced fighters. Because the terrace is open, with the top half covered with gates, the wind was blowing loudly enough to make it difficult to hear some of the instructions he gave his nephew. He was simply tiring himself out as opposed to stepping into each uppercut. Another mistake Rodriguez made on a few occasions was dropping his left hand after throwing a right hook, a mistake in boxing. Edwin instructed him to keep the left hand close to his chin to avoid taking an unnecessary shot. 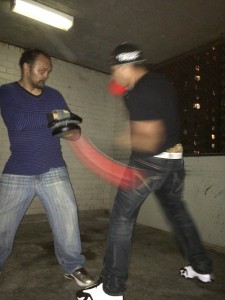 Rodriguez is still a raw fighter; he tired himself out trying to throw hard punches as opposed to throwing them the right way which his uncle attempted to correct. Power comes from your legs and he began to improve by doing things like “sitting down” on his hooks, which produce more power than trying to swing your arm hard. Despite some weaknesses, his uncle believes in him, “He has what it takes, if he didn’t have what it takes I would tell him, I would say look you don’t got it, don’t waste your time you’re going to get hurt.”