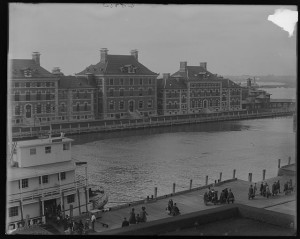 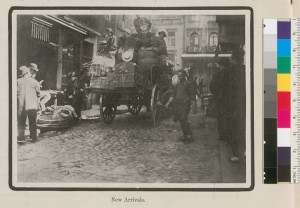 Depicts a group of Chinese men who have recently arrived in America. Wave Publishing Company, Dec. 1901

The beauty and symmetry of the Ellis Island architecture represents a false facade of organization, wealth and cleanliness while the street scene on the bottom represents the harsh reality of the turn of the century New York streets. Also, the top photograph is taken from afar and shows the people as tiny objects moving toward some level of the Ellis Island process while the bottom picture shows the anguish and emotion on the faces of the Chinese immigrants as they move their street car up the hill i thing in lower Manhattan.