Chinese Exclusion Act: This Federal law suspended immigration, in specific Chinese immigration. This ban lasted for about ten years. The California Gold Rush marked the first mass Chinese immigration to the United States. Understanding this law is important to also understand the context of these two pictures. Both of these images represent the attitude and feelings against the Chinese immigrants. The White community in the United States considered themselves the “supreme race” and they clearly were not welcoming of people who were neither white or black. Does the fact that the “white” folks were the majority race, mean they had the right to discriminate against other minority groups? Obviously no, but this was not the popular view in the late 1800’s.

The first picture represents a flyer which invites the white folks to come and ratify the Chinese Exclusion Act and suspend all immigration from South East Asia. The second picture similarly represents the anger the whites have for the Chinese, who continue to use their good work ethic to take the jobs of the “white folks.” This cartoon represents the California Gold Rush and the cheap labor Chinese immigrants provided to build the city infrastructure. 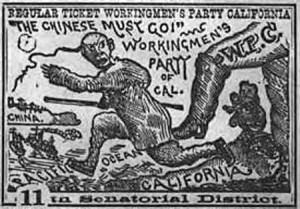