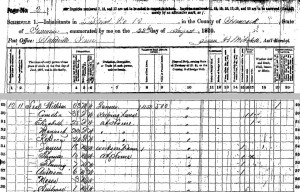 This is a primary document from 1870.  It is the census of The Seals Family living in rural Tennessee.  It indicates all the people that were living in the house this year and also some personal information.  There was a mother, father and nine children in this house ranging from the ages of 1 year to 25 years old.  It shows that four children, all boys, attended school and that all nine were born in Tennessee.  Some names indicate their profession.  Mr. Seal senior was a farmer and his wife Cornelia is listed as ‘keeping the house.’  The three girls stayed at home and James the eldest boy ‘ works on farm.’  The document also indicates who could read and write.       Censuses like this become a very important way that historians today can look at past information.  It gives an insight of what an everyday working man’s life was like.  A document such as this should hold only straight forward information however is possible, but not likely, the data being portrayed is biased or prejudice.  The war had only ended bitterly five years earlier and blacks were still seen as inferior to the majority of the south.  To many, they just ‘didn’t count.’         During and after the war, many freed slaves fled north or searched for loved ones that they had been torn apart from. A census’ main focus is to count the population.  In these situations it would become very difficult if not impossible for an enumerator to accurately accumulate the data that is needed.