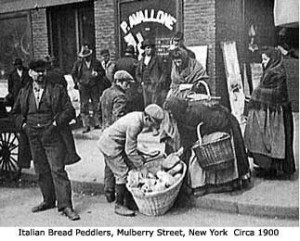 Immigrants that made the journey from their homeland into New York City typically moved to neighborhoods with the same ethnic background as themselves.  The streets were a very social setting much unlike today.  Modern day New Yorkers know that it is not uncommon to have no idea what your next doors neighbor’s name is.  The streets of “Little Italy” were filled with sales transactions, political view exchanges and general socializing everyday.  Finding work as an immigrant was never easy an easy task.  They had to take the worst jobs which included low paying wages, long hours and dangerous work.  It’s not clear in this lower picture but it is almost certain that this man four hundred feet in the sky is not wearing any safety equipment.  Through the hardship, immigrants pushed onward with the common goal of a better life, always helping each other along the way. 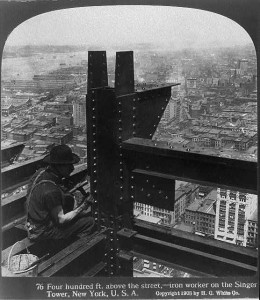