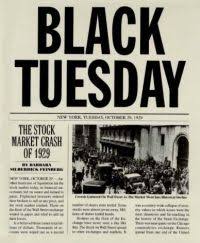 One of the major catalysts of the Great Depression was the stock market crash in October of 1929. The market lost $40 billion dollars in value in two months, which is at that time over 40% of the Gross Domestic Product of US in 1929. The crash led to widespread panic selling which fueled further declines in the market. Business conditions became bleak, leading to high unemployment rate. Black Tuesday was one the days when the market crashed and lost 12%, marking the beginning of the great depression. The market bottomed in 1932, after losing 89% of its value from its peak three years earlier.