” Seemingly overnight, a practice that had been part of the routine of public schools in much of the country since their founding-brief prayer to begin the day-had been banished”

One of the main themes from this chapter of American Empire is the emergence, from both the right and the left, of new, seemingly radical groups, that felt that the core beliefs that were essential to the ideology of their political groups were being foregone and forgotten. To me, there is no example of the lost of traditional values more clear and prevalent than the omitting of a daily prayer in public schools. As the quote explains, it instantly changed an everyday aspect of the lives of children that had been apart of country for generations.  When you asses  the effect that this has in the creation of the “new right”, it must have been immense. Conservatism by definition is the fight to keep the traditions of the past alive, and this was the past being changed right before their eyes. Traditionalist must have felt like their backs were against the wall and the only way to fight back was to become more vocal and arguably, more radical.

Quote of Page 204 of: American Empire.

“To lay the basis for achieving his ambitious goals and assuage the chronic self-doubt that shadowed his massive ego, Johnson wanted an overwhelming victory in the 1964 election. He was acutely aware that the ongoing civil rights revolution was shifting the national political terrain.”

I think Freeman mentions this quote because during this era, everyone is concerned with the quality of the goods instead of the quantity and everyone is fighting to achieve better living environments and so forth. Johnson wants to secure the presidential election but he is afraid he will lose the supports of many white Democrats so he used FBI surveillance to compromise on a strategy where white Democrats and black Democrats will be happy. This quote is relevant to the topic of Democratic Revolution because it shows the President himself doing something about Democracy being a bigger part of America. It causes influence not in only clubs and societies but you can use them to influence voting.

“In Mississippi, where African Americans were excluded from the process of selecting Democratic convention delegates, SNCC and other civil rights groups… founded the Mississippi Freedom Democratic Party.”

The MFDP was a group that campaigned to select an integrated delegation for the Mississippi seats at the 1964 Democratic National Convention. The MFDP was largely formed by SNCC(Student Nonviolent Coordinating Committee) and COFO (Council of Federated Organizations) during the Freedom Summer. Fearing political injury, Lyndon B. Johnson used the FBI to coordinate his plan to undermine the MFDP. In the end, the MFDP was able to get 2 out of 64 of their proposed delegates into the convention and the Democratic party promised to stop excluding African Americans from the selection process during the next DNC.  Although many saw this as a step foward, the MFDP saw it as an insult.

“Lyndon Johnson immediately understood that the Watts uprising would foster a white backlash against the civil rights movement and his Great Society.  He tried to distance himself from the LA events, delaying the announcement of a planned national urban policy so that it would not be seen as a concession to rioters.” (pg 215)

This small confrontation turned into a riot of roughly thirty five-thousand people.  The L.A police department could not subdue this mass riot alone and had to be reinforced by sixteen thousand national guard soldiers.  The riot resulted after five days of the Voting Rights Act.      This scale of hatred in L.A of racial inequality was on a completely new level with this violent riot.  Thirty four people were killed during this riot and four thousand had been arrested.  This riot was a whole new level of liberalism.

In 1962 “Port Huron Statement,” issued by one of the new campus groups, Students for a Democratic Society (SDS), put forth a sweeping indictment of American society for racism, inequality, complacency, and bureaucracy. But its suggested remedies- federal initiatives in the area of civil rights, poverty housing and economic realignment of the Democratic Party into a national party of liberalism- went only a bit beyond Fair Deal- New Frontier liberalism.

SDS was a major influence on social issues during the 1960’s. It was an activist group comprised of college students that organized themselves in order to voice their opinions, combat injustices and promote reforms. The significance of the SDS in the chapter is to show that these activists made up a large portion of the New Left. They organized rallies, teach-ins and protested for issues like the Vietnam War, civil/ gay rights and poverty.

In chapter 8, Freeman discusses the climax of the Liberal movement in the 1960’s.  He talks about the disputes Liberal leaders and institutions faced by the growing opposition from every side,  from within, challengers such as the growing student population and civil rights activists. It was also being attacked from the right, as conservatives were joining together and rebuilding the right movement under the wing of Arizona state senator Barry Goldwater. Although Goldwater failed at both attempts for the presidency, “emerging as a bright star on the conservative horizon, he helped revive the movement by repackaging old themes in attractive new ways.” (pg. 195) Like the civil rights activists, Goldwater was also rallying for freedom, but in a different sense. In his campaign he promoted freedom from government interfering in the lives of citizens through regulation and the limitation of states’ rights. Freeman mentions this “New Right” in order to show the “intensification” of politics on all sides that were taking place during the late sixties. He explains that Liberalism at this point had been its strongest but had also reached its peak, and the defeat of Vietnam War on the horizon would soon diminish its appeal. 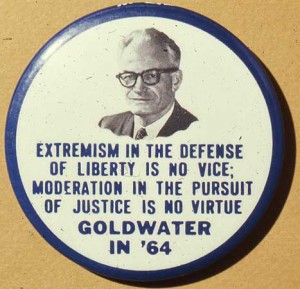 “On June 21, three project members, James Chaney, an African American from Meridian, Mississippi, Andrew Goodman, a white student from New York City, and Michael Schwerner, another white New Yorker […] on their way back from investigating a church burning, were arrested by a deputy sheriff in Philadelphia, Mississippi, and then released on the deserted road into a Ku Klux Klan ambush. Klan members killed all three and hid their bodies.”

I think that Freeman mentions that to show the importance and the scale of segregation and racism in the Southern states. He wants to show that with the first signs of emergence of civil rights in the South, especially Mississippi state, a lot of people became very resilient to it, not wanting to change or desegregate any part of their lives. The importance of this murders that took place on June 21 shows how the members of Ku Klux Klan were angry about any attempt of implementation any civil rights in the state. If before the victims of Ku Klux Klan were African Americans, so now there were white victims, which proves that it is not only the issue of racism but the issue of not giving up the old way of living in any case by any matter. In addition, the fact that the young civil rights workers were arrested by a deputy sheriff and then thrown into Ku Klux Klan den shows that the violence and terror was deeply integrated into state’s official structures.