“The Soviets saw SDI not as a defensive measure but as a prelude to an attack” Pg. 393

No program reinforces Freeman’s argument that the early 1980’s saw a re-ignition of tensions between the Soviet Union and the United States then creation of the Strategic Defense Initiative in 1983. Sold to the American public as a purely defense measures, the strategic defense Initiative was an attempt to use new technologies, namely satellites in space, to monitor and if need be destroy any soviet missiles fired at the United States, granting it it’s nickname ” Star Wars”. The Soviet Union officials did not see it that way, instead they were convinced that it would be used as an offensive measure and became even more mistrusting of America. The program never really took flight ,as  both the technology was  simply not advanced enough and it did not generate a large amount of support. 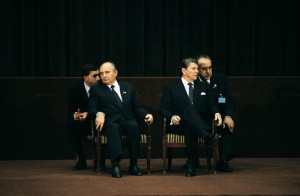 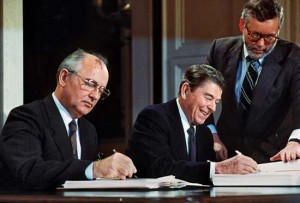 “Especially frightening to Soviet officials was Reagan’s Strategic Defense Initiative (SDI), a plan to develop a system to defend against ballistic missiles, which he announced in a nationally televised address two weeks after the “evil empire” speech.” (p. 393)

Not only the two empires were fighting each other on foreign countries’ territories, but also they were in constant rivalry developing arms. SDI was the escalation point in the Soviet-American relationship. Reagan was excited to create a system to defend against ballistic missiles (antiballistic missile defense system). Even though it was portrayed as a defense system, the Soviet Union saw SDI as a “prelude to an attack”.

In 1986, three years later, Mikhail Gorbachev and Reagan would try to negotiate an agreement on strategic nuclear arsenal, cutting their intermediate-range missiles in Europe; and would try to reach a consensus on a certain SDI restrictions. This proves that existence of SDI was essential for both countries. And the fact of trying to reach a negotiation would be a powerful sign of the Cold War coming to its end.