For untold ages of human history, government was the haphazard expression of a strongman’s greed and whims. The Greeks invented democracy, Magna Carta curtailed a monarch’s absolute power, and the American Revolution brought us representative government. Then, starting in the early 1900s in New York, a movement sprang up to rationalize the governmental process of turning policies into action and create  a science for public betterment though accountability and budgeting. Baruch College’s collection of papers of the Institute of Public Administration tells that important story in some 700 boxes of files and published reports that we’re just beginning to process. We’ll report on our progress in this blog.

To begin at the beginning… 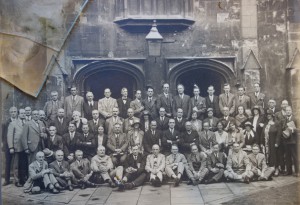 Luther Halsey Gulick (above, seated second row second from left, and in the closeup below) joined the New York Bureau of Municipal Research as a government trainee in 1915, and masterminded its transition to the Institute of Public Administration, serving until 1980. He became a key wartime advisor to President Franklin D. Roosevelt and helped reorganize New York City’s government in the 1950s. Gulick died in 1993, a week short of his 101st birthday. 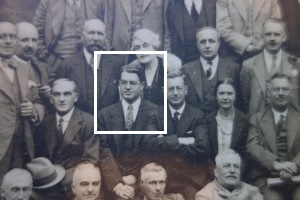 WHAT WAS THE NEW YORK BUREAU OF MUNICIPAL RESEARCH? Founded in 1906 by a triumvirate of Progressive Era reformers known as “the ABCs” — Dr. William H. Allen, Henry Bruere and Frederick A. Cleveland — it represented the first effort to create a science of civic affairs and professional public service by applying the same revolutionary methodologies to government as Henry Ford and his production line were  bringing to manufacturing. Its Training School for Public Service, established in 1911 and directed by the eminent historian Charles Beard, represented the first effort in the nation to create a professional bureaucracy — a forerunner of the preeminent Maxwell School. One of its early trainees was master builder Robert Moses. The Bureau’s historic first report, “How Manhattan is Governed,” revealed the crooked ineptitude of city government, and its landmark 768-page 1915 study of New York State government likened the overlapping agencies to a “web spun by a drunken spider.” The Bureau became the National Institute of Public Administration in 1921 (Later, just the IPA.)

Bankrolling the Bureau from the start were such eminent benefactors as Andrew Carnegie, John D. Rockefeller Jr.,  the Ford Foundation and even J. P. Morgan. (The financier was shown a dozen erasers for which the Police Department had paid $1.50 but were available for 32 cents, as the Bureau found. Morgan was so dismayed he gave the fledgling agency $10,000 — equivalent to nearly $250,000 today.) R. Fulton Cutting, an 1890s reformer from the Citizens Union (and a wealthy descendant of Robert Fulton) also helped finance the startup of the Bureau, along with E.H. Harriman, who said he wanted to do for government what he had done with his Union Pacific and other railroads — improve accountancy for management.

A pioneer of public administration, Luther Halsey Gulick, scion of a prominent missionary dynasty, was a mainstay of the organization for an astounding 65 years, from 1915 to 1980. He died in 1993 a week short of his 101st birthday.

WHAT’S IN THE COLLECTION? 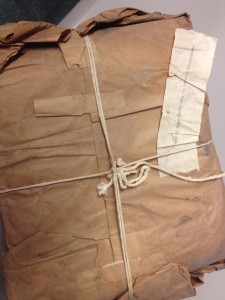 We’re only beginning to process the approximately 700 boxes but we’ve already found some fascinating material, including many bound studies of municipal mismanagement that the Bureau conducted around the country. Some of the volumes might exist in individual libraries in the various municipalities but Baruch’s collection appears to be the only place they are assembled, affording a scholarly overview of the state of the nation’s municipalities in that momentous era. A random sampling turned up reports on: the finances of Newark (1919), school children in Hoboken (1914), the notoriously corrupt Hudson County, N.J. (1912), business methods of Portland, Ore., (1913), the “Pauper Department” of Springfield, Mass (1914), and police departments of New Orleans (1921) and Baltimore (1941). 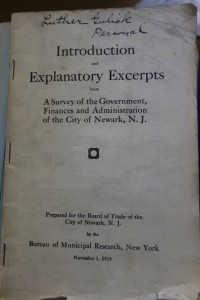 Gulick became a key advisor to President Franklin D. Roosevelt on government reorganization (including the beginnings of Social Security). When War War II threatened, the Carnegie Corporation paid for Gulick to leave the IPA and move to Washington to work on “the current emergency.” During the war, financier Bernard Baruch mentored Gulick on military reorganization.

The collection includes Gulick’s papers, including secret files from his World War II service in the Supply Division of the War Department General Staff, a report Gulick wrote on postwar looting in occupied Berlin, and notes from the Nuremberg Trial where he reviewed the 20,000 pieces of evidence against Nazi leaders. 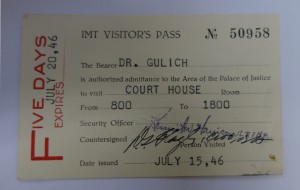 After the war, Gulick served as an advisor to President Truman at the Potsdam Conference with Churchill and Stalin, worked on reparations from the Germans and Japanese,  and became friendly with the Harrimans’ s son, Averell, who became the American ambassador in Moscow. Starting in 1959, Gulick worked closely with the Ford Foundation to save the Abu Simbel temples of Egypt from the waters of the Aswan Dam. Gulick made many trips to Egypt and became a confidant of Nasser and Sadat.

The collection also includes the IPA’s reports on the critical restructuring of New York City’s government in the early 1950s, complete with dissenting reports on tax policy and other fiscal issues and traffic solutions, including bridge tolls. “Never before has local government undertaken such an exhaustive self-analysis,” declared the influential Women’s City Club in 1952.

But reform didn’t come easy. Tammany Hall ridiculed the efforts of  “the Bureau of Municipal Besmirch” even as the agency battled scandals of its own: a bookkeeper absconded with funds, clients refused to pay for studies performed, and staff salaries were halved when the Bureau failed to adhere to its own budget. And the Bureau nearly came apart in the nineteen-teens over charges by founding father William Allen that its lofty mission was being “Rockefellerized” out of existence.

There’s lots more to come as we comb through the records.