In the second half of the 19th century, New Yorkers certainly horsed around. Indeed, one of the biggest problems faced by municipal planners of a rapidly growing metropolis was the staggering number of horses needed to keep the city running. The problem of cleaning up after the herds presented a logistical nightmare.

Growing mechanization at the turn of the 20th century eventually solved this problem but horses did not disappear overnight. In the first two decades of the 20th century horses were still to be found employed throughout the city. In fact, the company that styled itself “the largest horse supplier in the world” at the start of the last century was located on the spot where Baruch College’s William and Anita Newman Vertical Campus now stands. (Before that it was a livestock market.) 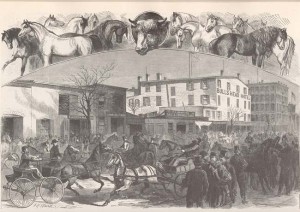 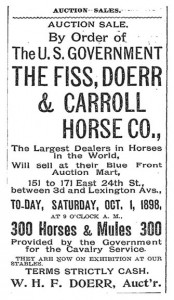 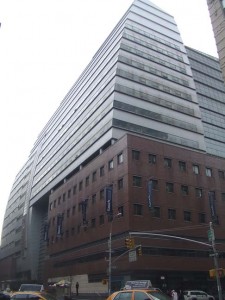 In 1913 the New York Bureau of Municipal Research decided to investigate how many horses were still being used by various city agencies, sending out a brief questionnaire with the following questions:

1 – What is the location of all stables owned or leased by the department, with their capacity of horses and the number of horses at present stables in each?

2- How many horses does the department own, and to what use are they put?

3 -How many horse-drawn vehicles are owned by the department – where are they housed and to what use are they put?

4 – What is the average number of horses, drivers and vehicles hired per day – the average time each is worked – and the rate of hire? Are they hired regularly all the year or only at special times? 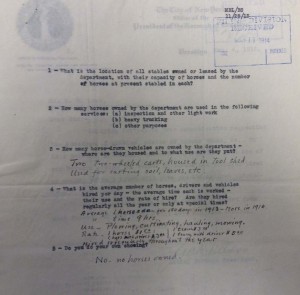 The result showed that almost every single city department and agency either still owned or regularly hired horses for various jobs. The largest horse owner was the Department of Street Cleaning (the future Department of Sanitation) which had 2,823 horses in Manhattan, Brooklyn, and the Bronx. (Queens and Staten Island often came under a different administrative structure.)

The Fire Department was  second, employing 1,400 horses for fire engines and transportation, in addition to hiring around 60 horses from outside vendors. 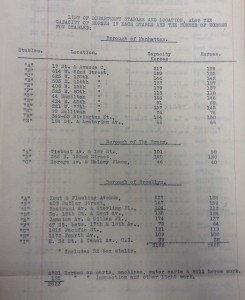 The majority of the departments, however, owned far fewer horses. For instance, the Board of Education had only two stables – one in Queens and one in Brooklyn, with a total of six horses. The horses were used for such tasks as delivering laundry and bread (and sometimes truant students) to the Brooklyn Truants’  Home, as well as carting manure, plowing and harrowing on one of the school farms.

One of the Home’s more notorious denizens was Salvatore Lucania, better known as the mob boss Lucky Luciano, who did a stint there in 1911.

Bellevue Hospital had 14 horses in its main location of which one was used for a hearse, one for the transfer wagon, one for laundry truck, one for store truck, 8 for ambulances, and 2 for the pathological laboratory. At least one horse at its Fordham location was used for transportation between the subway and hospital for visiting physicians and other individuals. 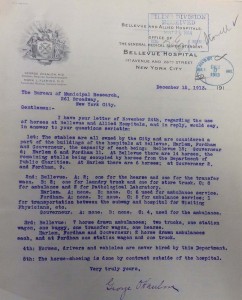 Some departments owned almost no horses and contracted out. For instance, the Department of Public Works owned a single horse which was used by the inspector in charge of roads and viaducts. It would however hire horses on a daily basis if needed.

Similarly, the Bureau of Weights and Measures had no stables or horses but employed two horses and wagons at a rate of $5 a day (around $120 today). Because the average daily rate was around $3.50, the department felt that it needed to justify the steep price tag in its answer to the Bureau of Municipal Research, noting that only a single inspector was present in each wagon but was required to carry between 1,000 and 2,000 pounds of test weight. Lifting the weights required a great deal of effort and the driver of the cart was paid extra to assist the inspector. If not for this expedient, noted the Bureau, a second inspector in the cart would entail an additional annual salary expenditure of $1,200.

Interestingly, the only city agency that did not indicate the employment of any horses was the New York Public Library. It  used two electric delivery wagons to transact its business. How green was my Library! 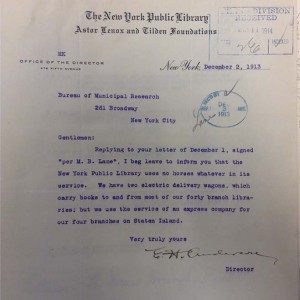 4 thoughts on “Putting the Horse Before the Cart”