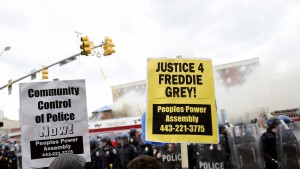 Almost 75 years before Freddie Gray, an unarmed black man, succumbed to unexplained injuries after an unexplained encounter with the Baltimore police, touching off rioting,  Luther Gulick dispatched his top police expert to survey the Baltimore Police Department’s organization and crime-fighting skills. The department had long resisted hiring what it called “colored police” but in 1937 had surprisingly taken into the ranks an African-American woman, Violet Hill Whyle, followed by four African-American men.

The IPA’s expert, Bruce Smith, widely regarded as the preeminent police authority in America, landed in Baltimore in 1941 — and quickly stepped into a racial quagmire.

Here’s the tale as told today in an op-ed article in the Baltimore Sun: