We don’t usually publish guest posts on this blog but we’ll make an exception here, not just because the contributor is family — the Baruch College archivist Sandra Roff — but because the subject is literally close to our hearts and does connect to the progressivism of Luther Gulick and the Bureau of Municipal Research. 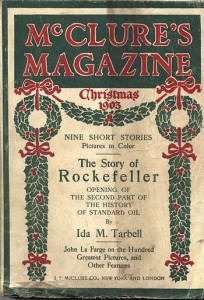 So imagine our surprise and delight to find that the Library Archives where we’re preparing the Gulick Papers and IPA Collection for preservation and wider scholarly distribution is a former home of none other than McClure’s Magazine, that icon of muckraking that published Ida Tarbell’s expose of the Standard Oil Company and many other journalistic classics. True. Long before Baruch moved into the renovated William and Maria Newman Library at 151 East 25th Street in 1994 — 99 years before, in fact — it was built for the Metropolitan Street Railway Company as a power station burning coal to generate electricity for trolley cars running on the Lexington Avenue Cable Road north to 105th Street. You can still see the oversize portals. http://www.baruch.cuny.edu/library/alumni/online_exhibits/baruch_campus_exhibit/evolution.html

The railway company leased space in the building to other businesses, among them the magazine and publishing enterprise Sam McClure founded in 1893 and relocated from downtown in 1896. McClure’s offices were on the sixth floor, a flight above from where I’m writing this, and now part of Baruch’s computer center. Alas, the building was completely gutted for its renovation, so there’s not much hope of finding, say, an old locked closet stuffed with Lincoln Steffens’s notes for “The Shame of the Cities.” McClure’s moved out for larger quarters on 23d Street and Fourth Avenue (now Park) in 1904. But we bask in the aura, nonetheless.

Oh, and the Gulick connection? The years when McClure’s was resident here coincide with the formative years of Robert Fulton Cutting’s Citizens Union and its Bureau of City Betterment, which became the Bureau of Municipal Research where Gulick and Robert Moses and the momentous effort to invent a new science of honest, effective, accountable and professional government got their start.