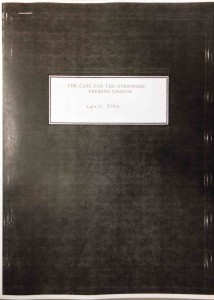 Why car-owners should pay to park overnight

Looking for ways to raise city revenue back in 1952, New York planners floated a bold scheme: charge car-owners to park on the street overnight. Predictably, it set off an uproar, before dying repeated agonizing deaths. Plural.

The story emerges in news clippings and files of the Mayor’s Committee on Management Survey, that mouthful of municipal MEGO (my eyes glaze over) with the worthy purpose of modernizing New York’s antiquated government to meet the challenges of a fast-changing postwar world with its urban congestion, crime, and commuters. The panel spanned the mayoralties of William O’Dwyer, Vincent R. Impellitteri and Robert F. Wagner and was, of course, directed by our own Luther Gulick.

But Fitch was eminent in his own right, “a prescient analyst of the fiscal and administrative problems of cities and governments,” as The New York Times recounted when he died at 83 in 1996 (almost four years after Gulick.) Fitch also liked to say he was the only public official in New York who could rope, tie and brand a calf. Fitch’s brother, Val, was no slouch either. A Nobel laureate in physics, he had worked on the Manhattan project developing the atomic bomb. 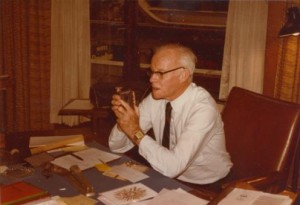 “The Case for the Overnight Parking Charge,” a 19-page report marked Confidential that Fitch delivered to the Mayor’s Committee on April 10, 1952, called street parking a valuable “privilege” that car-owners should pay for. That included overnight parking. As proof, he noted that garages charged as much as $30 a month ($269 in current dollars, yet still amazingly cheap by today’s standards).

Fitch suggested a charge, or tax, of $5 a month ($44 today), or $60 a year ($538), to park overnight. That was calculated to raise $12.5 million a year ($112 million today) and would have the added benefit of keeping more cars off the street and facilitating street cleaning. “How much would New Yorkers be willing to spend to have clean streets instead of the present shamefully dirty ones [?]” he wrote. According to Sanitation Department calculations, where parked cars occupy more than 50 percent of curb space, the extra cost of street cleaning amounts to $76 per curb mile per day, ($682 today. ) Total extra cost to the city, every year, in today’s dollars: about half a billion dollars.

The city had yet to adopt comprehensive day-parking restrictions, so all-night parkers were often all-day parkers as well.

But critics savaged the report. What if motorists were taxed and then couldn’t find a spot? They would be paying for nothing. (Parking meters were still a thing of the future in New York.) The Automobile Club of New York denounced the proposed fee as “an obnoxious tax gouge.”

Less than two weeks after Fitch delivered the report, the Times on April 22, 1952 reported its sad fate: DOA 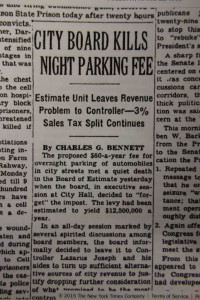 But wait! Two years later, with Wagner now mayor and Gulick his City Administrator (a post that Gulick’s committee on management survey had urged), the overnight parking fee rose from the grave — only to be quickly buried again. It sprang to life  anew  in 1959 — when Fitch was deputy City Administrator, and once again was hammered into its coffin.

In 1969, a newly reelected Republican fusion mayor, John V. Lindsay, asked a hostile Republican Legislature for taxing authority to impose the overnight parking fee, among other duties, to subsidize the city’s 20-cent transit fare. (Really? Twenty cents!) The lawmakers responded that the city had long had that authority but never used it. Lindsay, like the mayors before him, left it for dead.