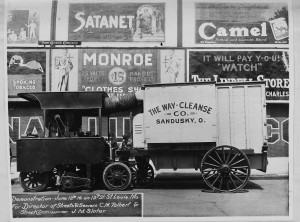 But there was a time 100 years ago when the vacuum sanitation upstart was, uh, cleaning up, pledging to rid America of what it called “the Menace of Fine Street Dust.” As the company explained in its brochure: 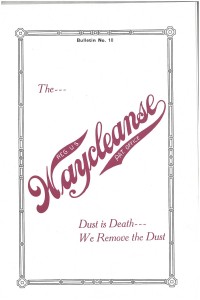 The story is told in a fascinating report spotted recently by an eagle-eyed member of the Baruch Library Archives’s digitization team, Benjamin Long, engaged in preserving and promulgating records of the New York Bureau of Municipal Research (which became the hugely influential  Institute of Public Administration).

The report documents the Way-Cleanse Company’s 60 days of street cleaning tests by “suction street sweepers” in St. Louis  beginning June 1, 1916. You could say it dishes the dirt on a nation waking up to the hazards of pollution at a time when coal fires were filling the air with ash dust, and horses — not yet supplanted by the smoke-spewing engines of the automobile — were leaving their own odiferous imprint on America’s streets and roadways. 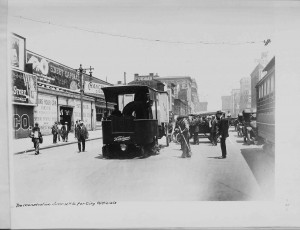 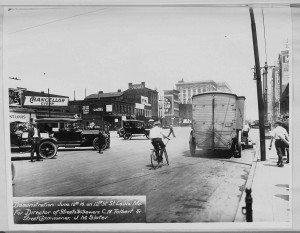 Everyone knew the problem of street litter, the company said. But few knew that “The chief danger to public health from street litter is in the fine, flour-like dust.”

“IT IS THIS DUST THAT CARRIES THE DEADLY GERMS.“ 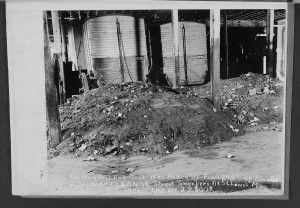 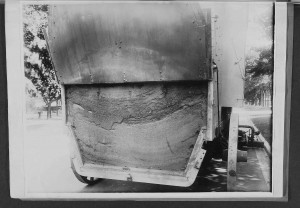 One scientific sample of street sweepings, according to Way-Cleanse, “contained 5,600,000 Bacteria per Gram.” 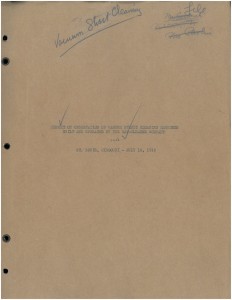 Atypically for such reports in our collection, this one is silent on sponsorship and, in fact, nowhere names the Bureau of Municipal Research as its source. Verifying that took a little detective work. The slender report — illustrated with stunningly clear black and white photographs pasted in, along with a company brochure — bore only the signature of one R.W. Parlin. But through the wonders of the Internet, we were soon able to identify him as the Bureau’s chief engineer.

In the test, two gasoline-driven machines were deployed nightly, sweeping 200,000 square yards of St. Louis streets. One machine cleaned the gutters, the other the center of the street. The machines each cost as much as $10,000 then — more than $217,000  in current dollars. Both consisted of a tractor with the cleaning apparatus — a mechanical broom and a suction device — and a trailer that collected the dust and dirt. The street machine took two men: an operator and a collector who picked up or loosened the larger pieces of rubbish. The gutter machine often required a third crew member to help with the picking up. 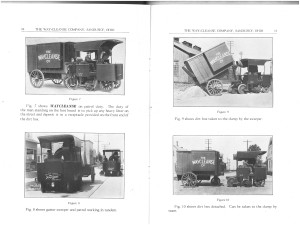 No one would call it it glamorous work: “Whenever horse manure stuck to the pavement, it was necessary to send a man ahead with a scraper to loosen it; otherwise the machine broom was unable to remove it.” Another caveat: while the machines removed dust from smooth streets, it missed the dust in grooves in the pavement, manhole covers and trolley tracks.

Also on the day operations were observed, an accident disrupted the tests: “the gutter machine having been run into by a street car, one of the countershafts had been so bent that it caused the heating of a bearing, and after about 45 minutes this machine was forced to stop work.”

The Bureau’s verdict: except for the quibbles noted, “the work of the machine was very effective and the streets over which they [sic] had operated presented a very good appearance…”

So whatever happened to Way-Cleanse? Hard to say. The New York Times only mentioned the company once, in a brief list of Delaware charters on Nov. 22, 1917.

Google the name today and you get a list of products to clean out your digestive system.