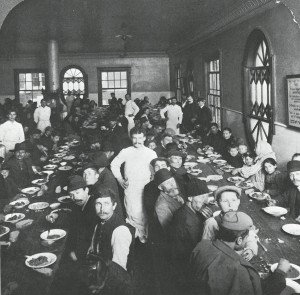 If 2015 was, sadly, the Year of the Migrant and Refugee, it’s worth pausing to remember the epic era of immigration some 100 years ago, and a shameful if long-forgotten history captured in the Baruch Library Archives. We’re talking about the Ellis Island Investigating Commission and a scandal within a scandal, as revealed by a chance encounter with some yellowing scrapbook pages…

Preying on victims of war and poverty, we see, long predates the modern-day evils of human trafficking.  Indeed, Ellis Island, a onetime naval arsenal and ammunition dump in New York Harbor, had barely been reconfigured as an immigration reception center in the 1890s and rebuilt in 1900 after a fire when the scandals proliferated. “The management of the Ellis Island business has been rotten,” complained President Theodore Roosevelt, shortly after the assassination of William McKinley thrust him into the White House in 1901, according to a lavishly illustrated album, “Ellis Island” with archival  photographs assembled by Wilton Tifft and text by Thomas Dunne (W.W Norton, 1971) in the Baruch Library’s Seymour Durst Collection.

New arrivals were robbed in the halls, shortchanged at the currency-exchange windows, and overcharged in the restaurant and railroad ticket booths. Agents took bribes to let the unfit pass or avoid questioning. Dishes weren’t washed between meals and the floors were littered with bones and food debris. 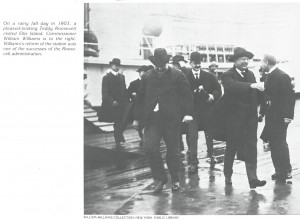 Williams, who ended up serving from 1902 to to 1905 and again 1909 to 1913, proved a worthy reformer, posting notices that began: “Immigrants must be treated with kindness and consideration…” But he also ran afoul of anti-immigrant lobbies and endemic abuses, according to another history in the Durst Collection, “Ellis Island: A Pictorial History” by Barbara Benton (Facts on File, 1985). 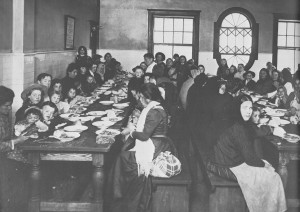 And another scandal was brewing.

We came across it by chance while examining old scrapbook pages in the Library’s IPA Collection, specifically the part dealing with the forerunner of the Institute of Public Administration, the Bureau of Municipal Research. 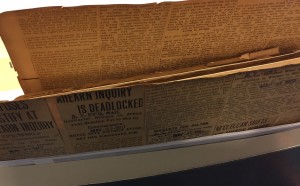 As recounted in numerous earlier posts, the Bureau was chartered in 1907 by a trio of Progressive Era reformers to constrain the bossist sway of Tammany Hall by inventing a new science of efficient, effective, honest and accountable government, administered by trained professionals. Its quick first  success was the ouster of the patronage-dispensing wastrel Manhattan Borough President, John F. Ahearn.

What caught our eye in two boxes of files from old BMR scrapbooks was this brochure from 1913 in which the Bureau appeared to be objecting to some kind of coverup of food conditions by the Ellis Island Investigating Commission. The tipoff was the reference to an attempted whitewash of Ahearn in 1907. We know how that came out. 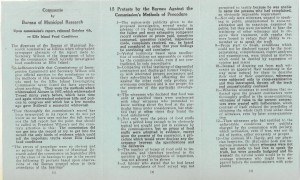 With the help of archived articles in The New York Times, we reconstructed the sequence of events.

The government had dealt with the scandalous conditions at Ellis Island by bidding out food service, currency-exchange and baggage handling to private contractors. Until 1908, when the contracts came up for re-bidding, the food contractor, Harry Balfe, was paid by the steamship lines, 24 cents a day to feed each person at Ellis Island. Currency conversions to today’s dollars are imperfect but it might represent about $6.31 today. For those traveling out, he sold boxes of food for 50 cents or $1 ($13.16 and $26.32, respectively, today).

The new contractor was Fritz Brodt who was paid per person per meal, 6 cents for breakfast and supper (or $1.50 today) and 10 cents for dinner ($2.50). But in 1910 Brodt was accused of not living up to his contract; after trial, it was annulled and ordered rebid. One of the new low bidders was the former secretary of Police Commissioner Theodore A. Bingham (notorious for declaring that half the city’s criminals were Jews.)

Hmmm, anyone smell a rat?

It got worse. Food scandals at Ellis Island proliferated. By 1913 an immigration inspector was testifying to having withheld evidence of fraud and the Bureau of Municipal Research had taken an investigative interest. The Ellis Island Investigating Commission was taking testimony about impure milk destined for the immigrants. 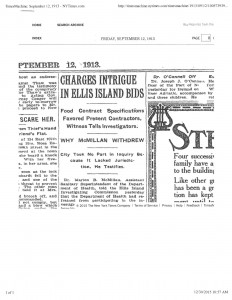 But when the Commission ruled the charges of fraud unfounded, the Bureau was withering in its criticism, saying the inquiry “never found the facts anywhere about anything.” 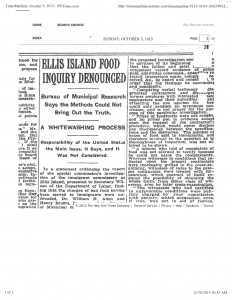 In 1916 the food contracts were rebid again, with the low bidder asking 20 cents a day for steerage passengers (about $4.44 today) and 30 cents for cabin passengers ($6.67). The steamship companies, which would have to pay, protested it was too high.

Instead, the contract went to J.J. Lussier, operator of the Yates Hotel and restaurant at 43d Street on Times Square, (just up the street, as it happens, from The New York Times’s new annex headquarters at 229 West 43d Street). Instead of a fixed price per immigrant, Lussier agreed to cater all meals for cost plus a 10 percent contractor’s markup. 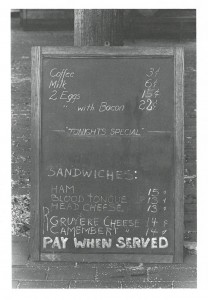