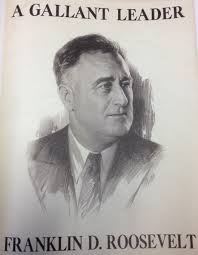 We never miss a chance to learn more about The New Deal, and the program May 11 at Roosevelt House, the Public Policy Institute at Hunter College, was everything a history buff would relish. For one thing, it featured one of the reigning experts on FDR, William Leuchtenburg, going strong at 94, with some two dozen books to his credit including his 1958 classic, “The Perils of Prosperity.” (We were privileged to be instructed by Prof. Leuchtenburg at Columbia Journalism School in 1963-4, when he was a mere stripling of 40, and we were even merer.) Here he is at his last academic redoubt, the University of North Carolina, Chapel Hill, where he is now the William Rand Kenan, Jr. Professor Emeritus of History. http://video.unctv.org/video/2183781430/

The occasion was the unveiling of Roosevelt House’s latest exhibit, “The New Deal in New York City” which will be up until Aug. 19. Displayed are posters, murals, photos and books, all telling the story of how FDR’s program to pull America out of the Great Depression played out in the nation’s greatest city. Much of the New Deal planning, in fact, went on here at Roosevelt House, 47-49 East 65th Street, where Franklin and Eleanor lived from 1905-34. http://www.roosevelthouse.hunter.cuny.edu/house-history/

Perhaps the best part of the exhibit is the colorful map highlighting dozens of the hundreds of public works and art projects, particularly murals, that The New Deal brought to NYC between 1933 and 1942. 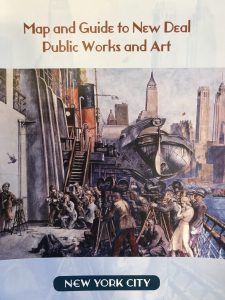 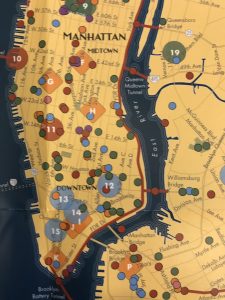 We were especially delighted to see we made the list with our Baruch College Administration Center (P) at 135 East 22d Street. 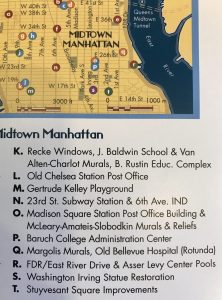 (Little side story here: In 2015 we discovered that the building had been converted from a Family Court built in 1940 — and still contained a holding cell with barred windows used today as a student tutoring center! We wrote that up for The New York Times. )

Prof. Leuchtenburg told of having been invited to Moscow for a symposium on The New Deal, which the Russians found a worthy role model. Upon arrival, he was notified that the keynote speaker was unavailable — he would be the keynote speaker. With no notes or prepared talk, he panicked. He saved the day, he recalled, by taking his audience on an improvised tour of America via the great legacies of The New Deal — from LaGuardia Airport, Triborough Bridge, FDR Drive and Lincoln Tunnel, to the Blue Ridge Parkway, the great Western dams and California coastal highway.

You can find all The New Deal projects here: http://www.fdrlibrary.marist.edu/archives/resources/newdealprojects.html#

Turns out that the Roosevelt House program was just the kickoff for a whole panoply of celebrations of The Living New Deal in New York. Next up is a forum at the Museum of the City of New York on May 18. http://njfac.org/index.php/living-new-deal-new-york-city/

One thought on “The New (And Truly Great) Deal”