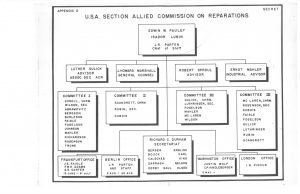 Of all Luther Gulick’s memorable contributions to the life of the nation — leading the first training school for professional public servants, streamlining FDR’s chaotic executive branch, masterminding relief for up to half a billion war refugees, spearheading the campaign to fluoridate New York City’s water, besides much else — one of the most historic was his work on the United States Reparations Missions to Germany and Japan under Ambassador Edwin W. Pauley, an oil magnate and Roosevelt’s wartime petroleum manager. Pauley, who died at 78 in 1981, is a worthy subject in his own right. https://www.trumanlibrary.org/oralhist/pauleye.htm

So are the reparations missions. https://www.archives.gov/research/holocaust/finding-aid/civilian/rg-59-5.html

We have our own rich files on Gulick’s involvement in the Allied effort to bolster the postwar order by defanging the industrial might of their former Axis enemies and holding them financially accountable for their crimes. They’re part of Gulick’s World War II archive that is next in line for planned digitization. 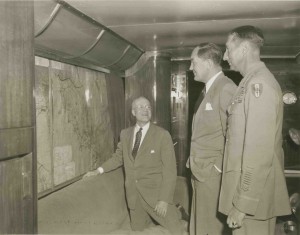 In June 1945, a month after the Nazi surrender, the Reparations Mission was in Moscow (Gulick saved his map as a keepsake) where the Soviets were demanding to receive half the roughly $20 billion (worth about $280 billion today) that the Allies discussed levying on Germany. But Pauley was cautious. https://history.state.gov/historicaldocuments/frus1945Berlinv01/d356 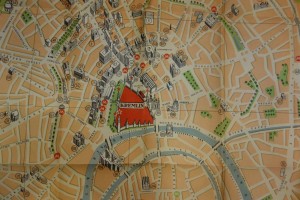 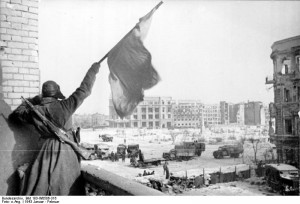 On July 25, 1945, according to a Top Secret report in the files, Gulick and another team member, Howard Marshall, reconnoitered the industrial area around jointly-occupied Berlin, finding that “Swarms of workmen, mostly men in Russian Army uniforms are at work moving, stacking and loading this material on flatcars…” The report went on: “When machinery is removed, everything in the plant is taken with it. The process is wholesale, not retail.”

When the Reparations Mission reached the Far East, it documented similar Soviet seizures of former Japanese war plants in Manchuria, depriving war-ravaged China with its battling Communist and Nationalist armies of a badly-needed industrial base.

In a July 13 secret report, Gulick and a prominent banker serving as a U.S. accounting advisor, N. Loyall McLaren, proposed creation of a special single-use currency called “Repunits”, for Reparation Units, backed by German commodities due the Allies as war reparations. There is no sign the idea went anywhere.

Reparations talks continued in Paris in the summer of 1946.  The files include a working draft of an unsigned and undated letter letter that Gulick may have prepared for Pauley to his boss, Secretary of State James F. Byrnes, complaining that efforts to remove “German war potential” by eliminating excess industrial capacity were being thwarted by Allied disunity. In the same vein, another unsent letter Gulick may have drafted for Byrnes from Pauley urges that to prevent German re-militarization, the industrial Ruhr-Rhineland area be designated a “Free Province” and placed under United Nations trusteeship.

Gulick’s handwritten notes offer a fascinating window into their plans for “French Peace for the Ruhr” with France annexing the Saarland. 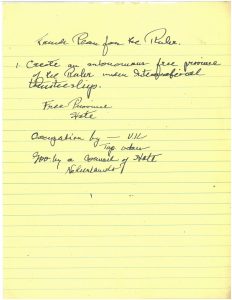 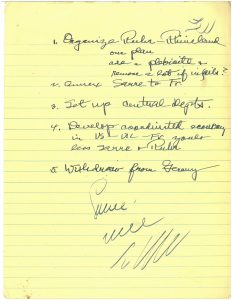 It became a French Protectorate but after a referendum rejoined the Federal Republic of Germany in 1957.

Gulick may also have drafted a bitter 1946 memo for Pauley depicting Germany as the victor of World War II, based on the failure of the Allies, divided by the advancing Cold War, to agree on how to curb their former adversary’s military and industrial potential. 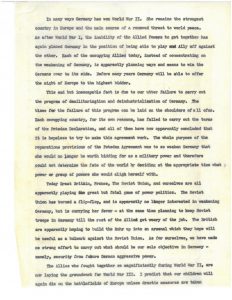 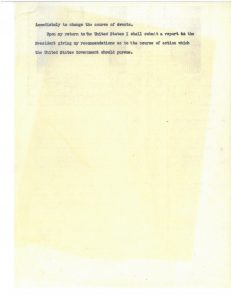 One of the most striking documents in the file is a 1946 memorandum to Pauley from a member of the Reparations Mission with Jewish roots in Germany, Ernest L. Klein, offering a third approach to helping Jews who survived the German genocide, beyond fostering increased Jewish immigration into Palestine and easing quotes for immigration into the U.S. Klein noted that Jewish immigration into Palestine “is savagely opposed by the Moslem world in the Middle-East.” Similarly, he said, there was opposition to letting more Jews into the U.S.

Instead, he told Pauley, “a bright opportunity presents itself for you to propose a third and novel solution to the Jewish problem”– creating Jews as a class of belligerents “entitled on the basis of their contribution of six million dead” to reparations, just like Filipinos and other war victims. To anyone who would argue that they were ineligible as German nationals, Klein pointed to the 1935 Nuremberg Laws depriving Jews of German citizenship.

“The frame work of the plan is simple,” Klein wrote, “the details can be handled later.” Whether Klein’s proposal had any bearing, West Germany and its reunited successor state after 1990 paid restitution to Nazi survivors, mostly Jews, totaling about $90 billion over six decades. In 1951, Klein published a diplomatic memoir, “What of the Night?” The Baruch library turned out to have a copy.

There is one other eye-popping document on saving Jews in the Gulick files — a draft marked “SECRET” from someone Gulick rendered as “Joe Dubois.” Gulick’s handwritten note from Paris dated July 8, 1946 said “not used.”‘

The answer, after some research, turns out to involve a grim but thrilling tale of wartime heroism. The writer was Josiah DuBois, a young (non-Jewish) Treasury Department lawyer who as early as January 1943  learned of the Nazi extermination campaign, thanks to a telegram to the State Department that U.S. diplomats long hostile to Jews were covering up. On Dec. 25, 1943, DuBois wrote his boss, Treasury Secretary Henry Morgenthau Jr. (who was Jewish) an 18-page memo called “Report to the Secretary on the Acquiescence of This Government in the Murder of the Jews” detailing how the anti-Semitic State Department was sabotaging courageous efforts to bring the genocide to light and save imperiled Jews. https://ww2db.com/doc.php?q=365

Morgenthau hesitated to deliver the report to President Roosevelt so DuBois condensed it to nine pages in a “Personal Report to the President.” The Government continued to dither (FDR’s role is still hotly debated by historians) but eventually created the War Refugee Board credited with saving many victims of the Nazis, although the American record of inaction is widely regarded as shameful. DuBois, who went on to lead the prosecution of I.G. Farben at Nuremberg (another grim but fascinating tale), was later celebrated for his heroism as a whistleblower.

The secret draft in the Gulick files shows that DuBois’s humanitarian efforts continued after the war, as he sought relief for pitiful Holocaust survivors confined in Displaced Persons camps — in some cases the same camps where they had been imprisoned by the Nazis. We cannot bring the dead to life, DuBois wrote, but we can save the living. “The time for talk has long passed — the time for action is long overdue.”

And so, he said, with the cooperation of some American generals, he was organizing a “caravan” of some 5,000 Jews from an unnamed D.P. camp in Germany to the frontiers of Italy. “There we shall knock at the door,” he wrote. “”We shall knock at the door not as a diplomatic mission, but a mission of mercy, and I am confident that the warm-hearted Italian people, who have already done so much to aid and comfort refugees from persecution and oppression, will greet us with open arms.” Their goal was southern Italy where they would make camp near some port until passage could be arranged to a more permanent refuge, probably Palestine.

The memo doesn’t say what happened — remember that Gulick noted it was “not used” — but the record of Italy’s hospitality to Jewish refugees is clear.

And so is the inspirational legacy of Josiah DuBois. 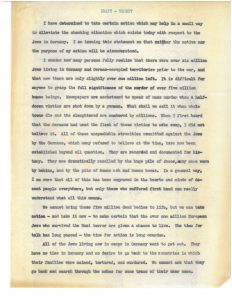 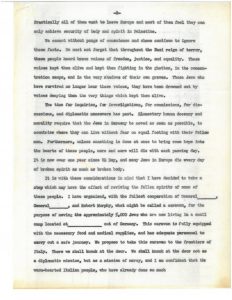 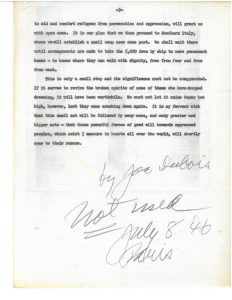