Historians spend a great deal of time and effort finding sources. For many of us, our sources are words, images, and things that dead people left behind. But some historians have living sources, raising a question – if a historian is trying to be objective, how close can he or she be to their sources? How close is tooclose? We’ll return to that in a second.

Bernard Baruch is a familiar figure to those affiliated with CUNY-Baruch. But Bernard wasn’t the only Baruch in public service. His nephew Donald Baruch spent nearly 40 years  as the Department of Defense’s liaison with Hollywood. 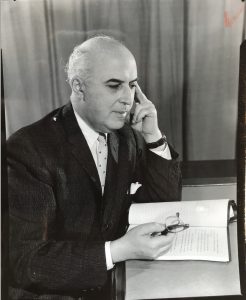 My research examines Baruch’s office and its impact on war movies during the Cold War. Though his titles varied, Baruch was responsible for arranging cooperation between Hollywood and the military. Need tanks, planes, military bases, or an Essex-class aircraft carrier (Pearl Harbor epic Tora Tora Tora got one!) for your movie? Want a military band for your premiere? Want the military to use your movie for recruiting? Baruch was the man for you, and for many years, he and the Pentagon alone could provide those things.

So what did Baruch and the DOD want in return? The short answer: control or influence –  his office edited the scripts of cooperating films. If the film studio said no, they would lose their military assistance. If a producer went rogue during production, the film would lose the military’s help in publicizing the film. My recent research charts the “red lines” that films couldn’t cross without losing Baruch’s approval, and I find that the military’s economic leverage enabled an unofficial censorship system for 1950s war movies.

This post isn’t about my work, though. It’s about two authors who wrote books about Baruch’s office: Lawrence Suid (Guts and Glory: Great American War Movies, 1978; 2nd edition, 2002) and David Robb (Operation Hollywood: How The Pentagon Shapes and Censors the Movies, 2004). Robb’s title gives away his stance on the “censorship” debate; Suid acknowledges there were script edits, but he claims there wasn’t censorship because nobody forced filmmakers to request assistance. Historians make a living on professional disagreement, but things got very personal when Suid reviewed Robb’s book in 2005.

In Operation Hollywood, Robb states that Suid was biased because Baruch had given him special access to his office’s files. They were too close, Robb said. When Suid reviewed Robb’s book in Film & History, he ignored its myriad structural and analytical problems, hurling insults instead: “garbage in, garbage out…egregious errors of fact…nothing could be farther from the truth…transparently false…[unable] to present an accurate account of the relationship between Hollywood and the armed forces.” The editor allowed Robb to respond and Suid to have a last word, and things only got uglier.

I won’t get too far into the weeds with their feud. Instead I’ll ask Robb’s question: how close were Larry Suid and Don Baruch? In both editions of Guts and Glory, Suid thanks Baruch first in his acknowledgements section, explaining that Baruch had answered questions and fact-checked his manuscript. Was that all? The Baruchiana Collection suggests otherwise.

Suid and Baruch met in the early 1970s while Suid was conducting interviews for his book. Their relationship deepened from there. Baruch wrote a glowing recommendation in 1976 supporting Suid for a prestigious fellowship with the Guggenheim Foundation. He describes Suid’s proposal as “of inestimable value…monumentally ambitious” and worthy of “serious consideration.” He attested that “having worked with Mr. Suid for several years and having gotten to know him personally…he is objective[.]” Though Baruch’s letter likely held weight – he socialized with Guggenheims during the 1930s – Suid did not win the fellowship. 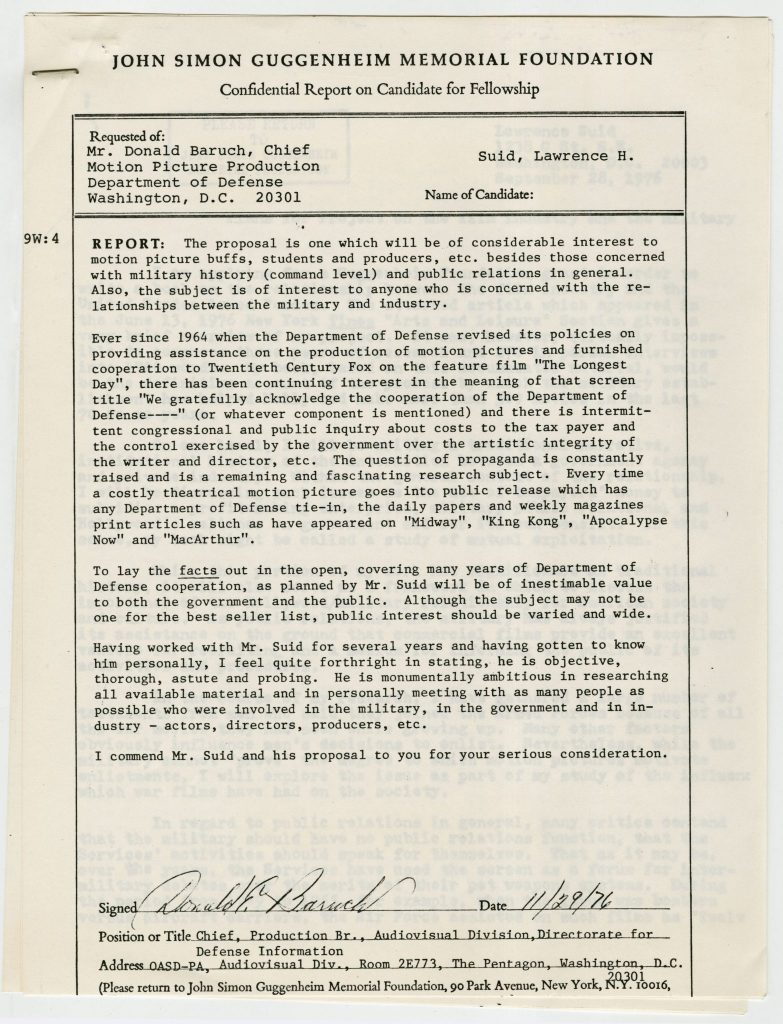 Their collaboration endured. Suid wrote a guest column for the Washington Film Council newsletter (Baruch was its president), and likely anonymously quoted Baruch in a 1978 Los Angeles Times op-ed discussing an ongoing review of the DOD’s Hollywood cooperation policy. During this same time, Baruch clipped reviews of Guts & Glory for his files, and Baruch updated Suid’s phone number in his Rolodex at least once, suggesting that they kept in touch.

During the 1980s, Suid turned to Baruch for career advice. Baruch’s papers contain an undated list of Suid’s book ideas, including a possible revision to Guts and Glory. Presumably, he asked Baruch which he should pursue. Apparently, Suid first tried to finish a cultural history of NASA, because Baruch’s papers include a hand-delivered draft chapter entitled “Hollywood, NASA, and the Pentagon.” The attached note: “Dear Don, sorry I missed you. Will call when I return to town. Larry.”

When Suid’s NASA contract ended due to Reagan budget cuts, he sent Baruch a job application, though it is unclear what role he sought. In a phone conversation with me last year, Suid indicated that he had helped archive documents for Baruch’s office, so the job application may be related.

Suid started revising Guts & Glory before Baruch retired in 1989. He sent Baruch an outline and a list of films for which he sought DOD files, annotated by Baruch’s secretary. 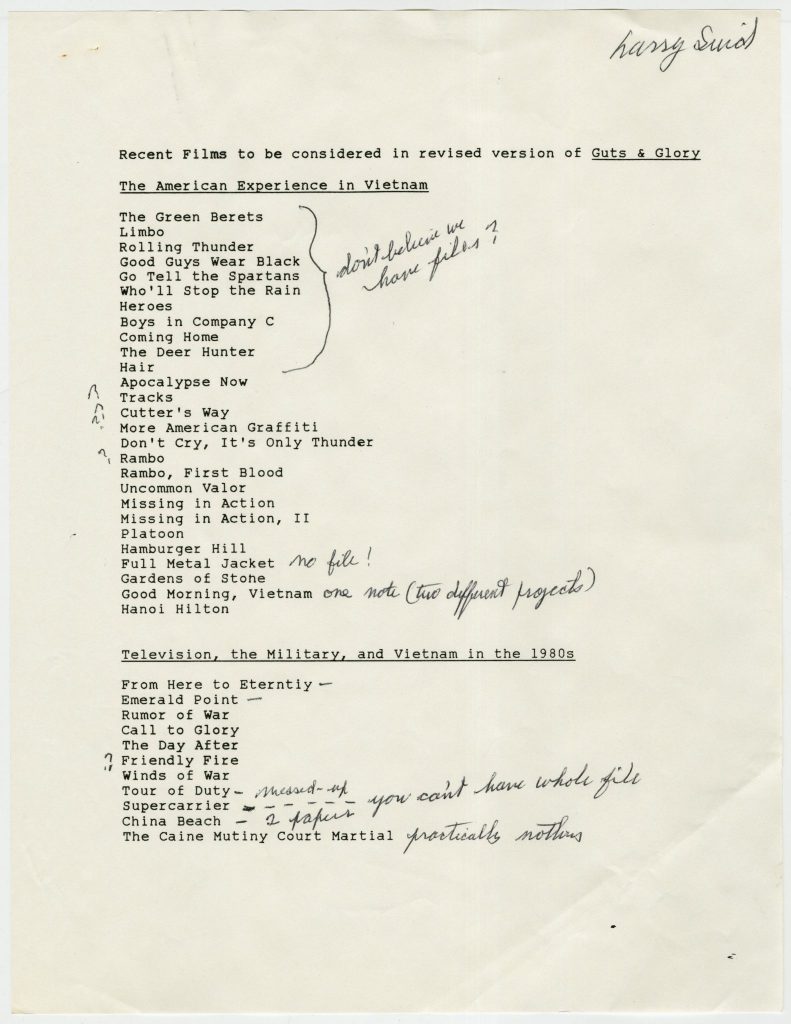 However, Suid delayed his revisions, and Baruch retired and passed away before the revised edition came out in 2002.  In all, Baruch’s papers offer a partial picture (since the collection itself is not exhaustive) of a sustained relationship between himself and Suid – perhaps corroborating Robb’s accusation.

But let’s return to our earlier question: how close is too close? This is a controversial question among historians, as better relationships with sources (or collaborative knowledge-creating ventures) can allow for better access to documents and information. But this time, Icarus may have strayed too close to the sun. Baruch had more than 20 years under his belt as a public information official before Suid approached him, and he had a knack for cultivating relationships that helped him get the military’s message into films – he included “personal contacts” as a necessary competency in a draft of his official job description.

Perhaps the man who manipulated Hollywood for decades was able to persuade the most influential historian of the DOD-Hollywood relationship. Indeed, Suid never seriously questioned Baruch’s argument that the DOD’s Hollywood support program did not censor films. Baruch’s influence over his own legacy just might be the greatest testament to his prowess as a public information officer.