What treasures our Gulick collection yields! (I know, we’ve said this before.) But in going through three cartons of letters and memorabilia recently gifted to our Library Archives by Luther’s granddaughter Lisa Gulick https://blogs.baruch.cuny.edu/ipaprocessing/2022/03/donor-gulick/ we found this leather wallet embossed with its evocative dedication: “Christmas, 1942, from F.D.R.” Among items retrieved from Gulick’s longtime summer home in Goldsboro, Vt., it was in a yellowing file folder marked “L.H.G. biography — Programs, resolutions, mementos etc.” 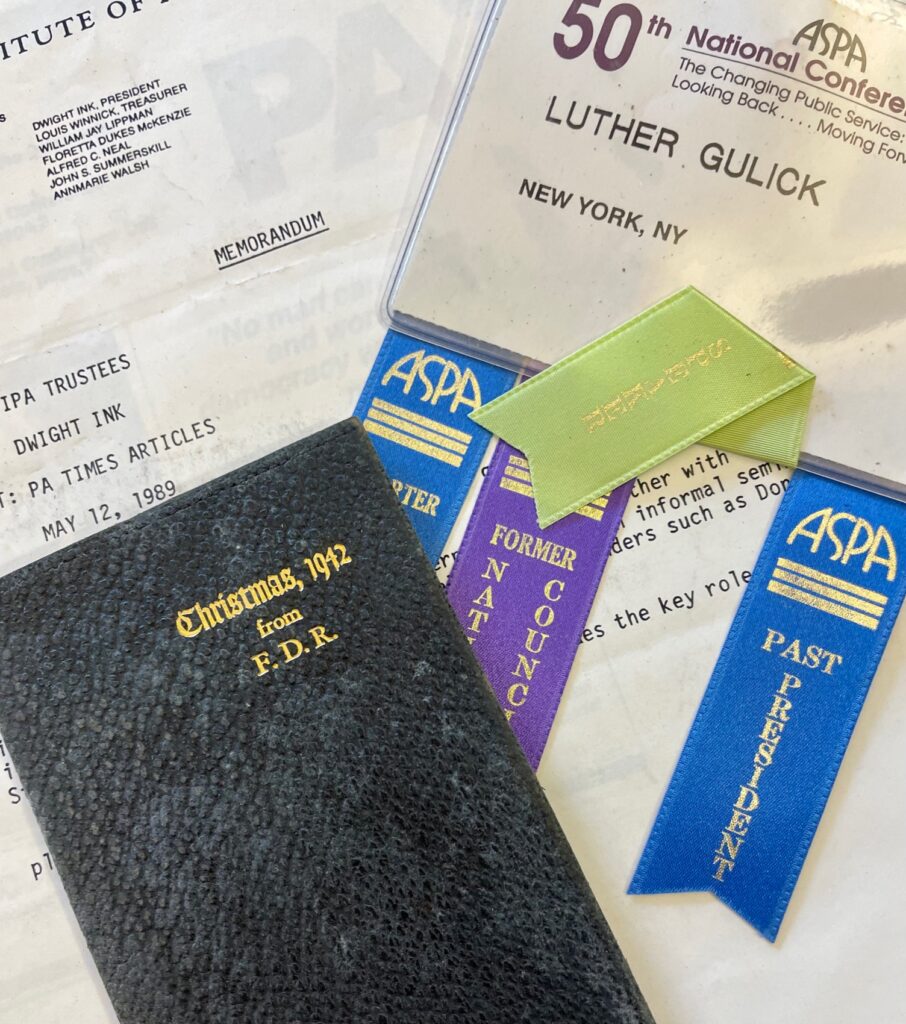 Doing some internet research, we found that Roosevelt handed these out as souvenir gifts bearing war savings stamps to White House staffers and other intimates and that one of them sold at auction in 2015 for $2,500. (It had been given to Dorothy Dow, a secretary to Franklin and Eleanor during the White House years, and the author of a 1984 memoir, “Eleanor Roosevelt, An Eager Spirit: Selected Letters of Dorothy Dow, 1933-1945.”) The second Christmas of the war was hardly festive, with millions of Americans off fighting in North Africa and the Pacific, but it was better than Christmas 1941 three weeks after Pearl Harbor.

And speaking of FDR, we also came across these letters. The first (left) recounts Gulick’s presence at a 45th anniversary New Deal dinner in 1978. Among the 500 guests were playright Dore Schary who wrote “Sunrise at Campobello”; Averell Harriman, whose philanthropist mother, Mary, had bankrolled the Training School for Public Service that enrolled Gulick and Robert Moses; Arthur Schlesinger; and Tommy (the Cork) Corcoran, one of FDR’s original brain-trusters. (“I sat at Tommy Chorcoran’s top table…” — Gulick often acknowledged his struggles with spelling and typing.)

The middle letter, about citizen education, is notable for Gulick’s tribute to Roosevelt’s legendary political instincts, as when he reminded his advisor: “Luther, you can’t get the people stirred up on more than one or two things at any given time.”

Bookending the epistolary trio is Gulick’s account of the 50th anniversary New Deal dinner in 1983, presided over by Roosevelt’s eldest son, James. The 500 alumni of five years earlier, now dwindled to 350, marveled over each other’s white hair and watched film clips of FDR’s first swearing in and his “mighty moving” inaugural address with the line, “…we have nothing to fear but fear itself.” 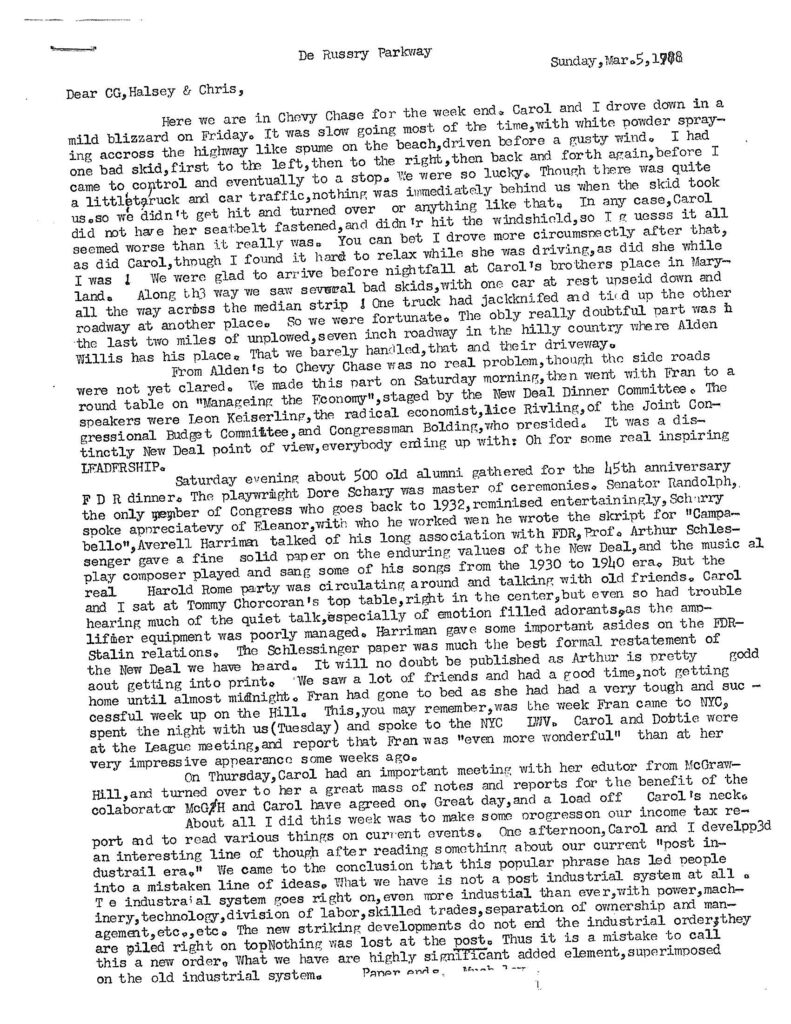 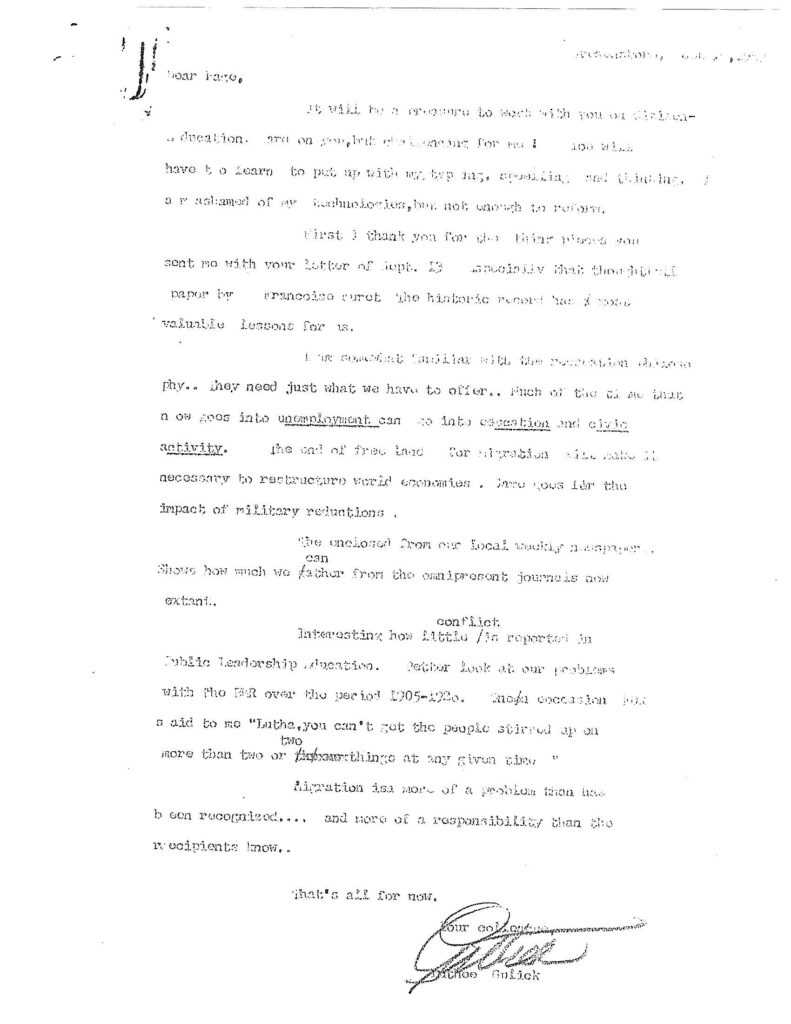 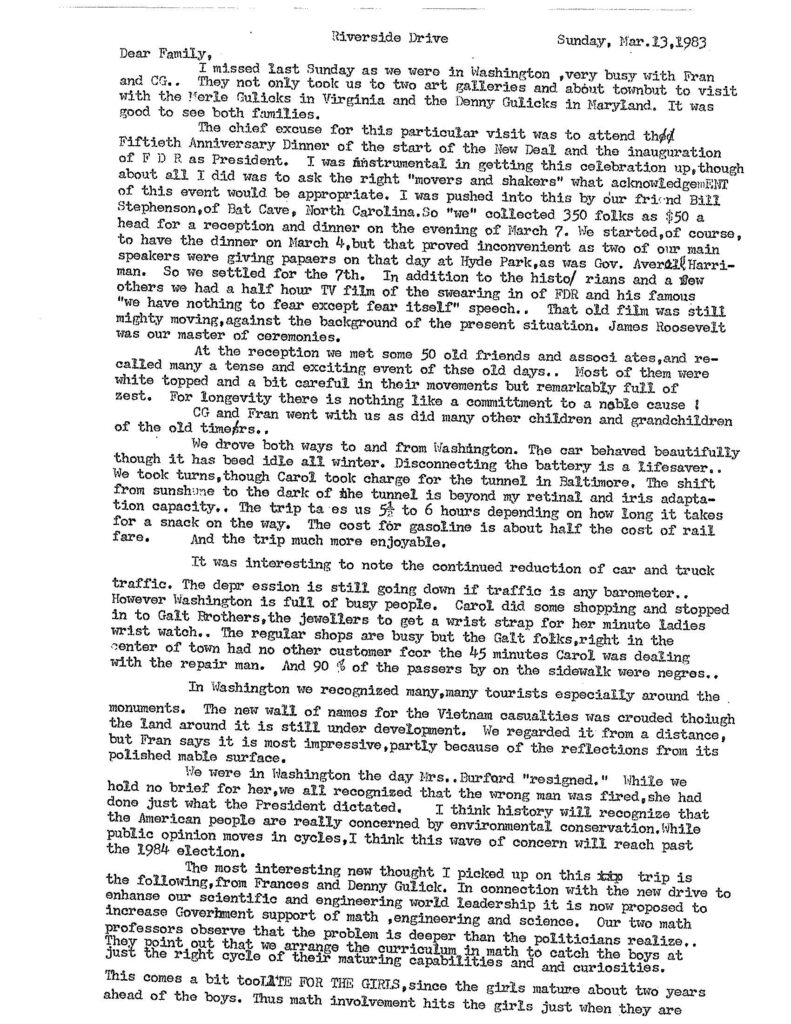