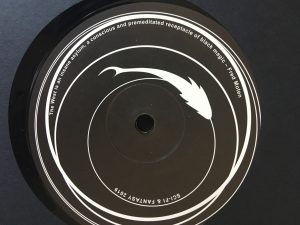 A quote from Fred Moten’s 2003 book In the Break: The Aesthetics of Black Radical Tradition reads on the face of Lamin Fofana’s record Black Metamorphosis, released from Sci-Fi & Fantasy in 2019: “The West is an insane asylum, a conscious and premeditated receptacle of black magic.”[1]

In the Break is a polyphonic performance, an orchestrated writing on the theory of performance of blackness, composed together with the voices of other artists, poets, theorists, and musicians. Moten presents us with an ethos of culture, politics, sexuality and identity that exposes the exclusionary Euro-American avant-garde, that is “necessarily not black”, while creating an aural lineage of black radical aesthetic. He reformulates the codes of the avant-garde –“an assertion that blackness is an avant-garde thing”[2] by redescribing a kind of aesthetic  based on improvisation, an artform that disrupts the conventional framework of self and other, and requires a practice of listening to activates the entire sensorium, which is what Moten calls “ensemble”. 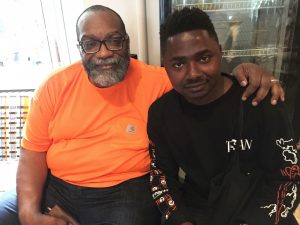 Lamin Fofana conceived of BLUES, which is also an ensemble, by inviting two other artists (Jim C. Nedd and Nicolas Premier) to create a body of sensorium that speaks to different senses without eliminating or excluding one another –a cohabitation of self and other. Moten’s ideas are echoed in this exhibition as ensemble alongside Sylvia Wynter, James Baldwin, Amiri Baraka, Beauford Delaney, Samuel R. Delany, Adrian Piper, Cecil Taylor and others who have influenced Fofana’s work. 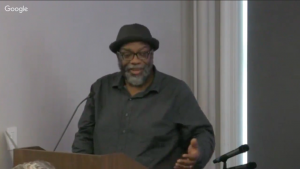 Fred Moten giving his keynote speech at “The Sound of Resistance Conference: Improvising Agency Conference 2017” as a part of Vision Festival 22 at Columbia University.

As an attempt to better understand some of the referential material in the exhibition, we revisit Moten’s 2017 keynote lecture/listening session “A Resistant Previousness” at Columbia University’s The Sound of Resistance Conference.

[1] Fred Moten: In the Break: The Aesthetics of the Black Radical Tradition. Minneapolis: University of Minnesota 2003, p. 39