New Adaptation of Pirandello’s “The Man With a Flower in His Mouth”@ Phoenix Theatre Ensemble Friday 9/12, Saturday 9/13, and Sunday 9/14.

Originally adapted for the stage from his 1918 novella “La Morte Adosso” in 1923, Pirandello’s play takes place in a bar late at night between a man who is confronting his mortality and a man who has missed his train home. Through a several month development process PTE has freely adapted the play incorporating updated language and the introduction and explorations of meta-theatre themes associated with Pirandello.

Artistic Director Elise Stone is directing and the cast includes Mark Waterman as The Commuter and Craig Smith as The Man. Cheryl Cochran will be seen as the Wife. Recording artist Alexis Powel and Hearsay and Hyperbole’s original music will be featured in the production.

Director Stone says “Pirandello’s plays have been updated, modernized, and re-imagined many times. We are not the first to adapt a Pirandello play, nor will we be the last. This is a testament to the genius of Pirandello and the lasting legacy of his work. For the recent past few seasons, PTE has been moving toward its goal of realizing original ensemble-created works, Flower has been an exciting process and it is the first public performance of this effort.”

What:   THE MAN WITH A FLOWER IN HIS MOUTH

Transportation:   By Subway:  F Train to 2nd Avenue; By Bus:  8th Street Crosstown to Avenue A; 14A to 4thStreet

Phoenix Theatre Ensemble:  PTE was founded in 2004 by five theatre artists who were all one time resident ensemble members of the prestigious Cocteau Repertory under the guidance of Artistic Director/auteur Eve Adamson. The intent of Phoenix was to maintain the Adamson/Cocteau principles of ensemble artists presenting classical text-based theatre, but to expand to incorporate new scripts, new adaptations, and ensemble-created works.

PTE has experienced significant growth in the last two seasons with the 2013-14 season providing increased programming resulting in 50% growth in pass holders/subscribers, and over 70% increase in box office revenue over the previous year. The 2013-14 unusual staging of  Shaw’s Don Juan in Hell is nominated  for 5 NYIT awards.

2014-2015 season will include new web-based initiatives, 4 mainstage productions (The Man With a Flower in His Mouth by Pirandello, The Creditors by Strindberg, Medea by Euripides and American Moor by Keith Hamilton Cobb), Late Night Series, interactive children’s programming, reading series, Anatomy of Scene seminars, and  the 3rd Annual First Stories Festival.

The 2015-16 season will include Robert Patrick’s Judas and the 2016-17 season will mark the 60th Anniversary of Brecht’s death with a remounting of the Eric Bentley/Darius Mihaud’s adaptation of Mother Courage and Her Children. 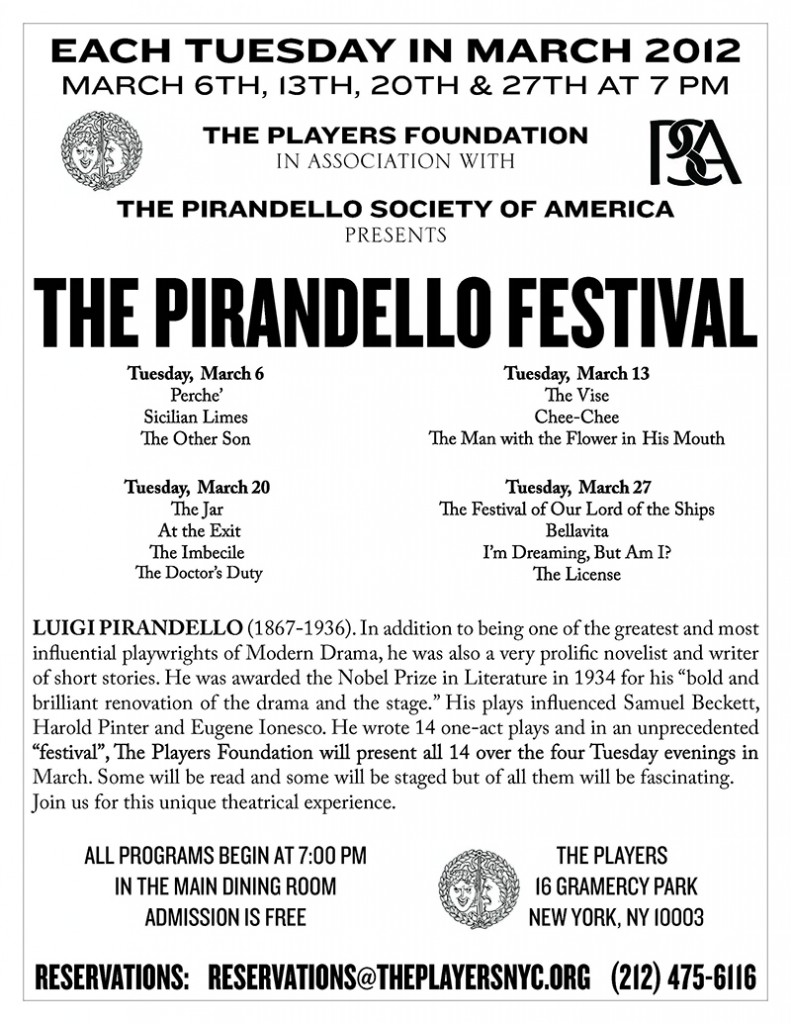 John Martello in Pirandello’s L’uomo dal fiore in bocca (The Man with the Flower in His Mouth).

Read about the play, including its historical significance as the first British televised play.