Born out of an anti-Enlightment fervor in which feelings are rejected in favor of evidence-based practices. 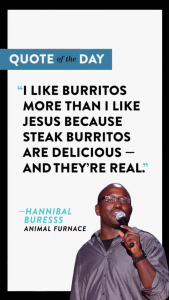 I found this image on snap chat and took a screenshot of it as in I’m not sure how to appropriately source this. Creative media pieces like these can promote a condescending and combative tone we might explore against the status quo (religious – “real world”). I’m interested in obtaining or creating more testimonials from people who also apply this train of thought to experiencing life. I’ve heard other comedians describe “miracles” as “coincidences”. I’m certain there are other instances where the our colloquial vocabulary can be traced to the spiritually inspired. It might be interesting to introduce those entering the wonderland to an entirely altered set of terms devoid of religious significance. After all, language dictates how we perceive the world. (also see: I can’t find the article right now but it was encouraging new parents to talk more to their babies because of the 30,000 word gap and it mentioned this now-refuted linguistics science about different languages determining our positionality) 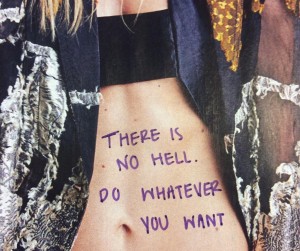 Another photo I found on twitter, not sure who to attribute it to since it was just sitting in my photo library and it’s old. I have a feeling it could be a subway ad that someone wrote/graffitied over.

One thought on “#1 Secular Wonderland”