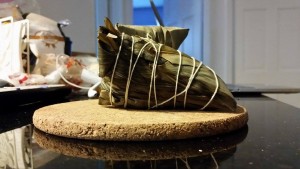 Here is a picture of some home-made zongzi.

Roughly two weeks ago, on June 20, many Asian Americans celebrated a holiday known as Duanwu Festival. The Duanwu Festival, also commonly known as the Dragon Boat Festival, is observed on the fifth day of the fifth month in the traditional lunar calendar. As Asian American millennials, we might not be familiar with the holiday but we are quite accustomed with its traditions–it’s the day we help our grandparents wrap zongzi! For those who are not familiar with it, zongzi can be thought of as the Asian equivalent of a Mexican tamale. It’s a sticky sweet rice, typically wrapped in flat leaves (my grandparents prefer banana leaves because of its easier to find), stuffed with meats, beans, and proteins. There is no right way to make zongzi as different Asian cultures have their unique combination of ingredients, and individual households have tailored their zongzi to their families’ preferences.

Although I’ve been wrapping and eating zongzi with my grandparents for as long as I can remember, this Duanwu Festival, I decided to ask about the holiday. Here is the story that my grandfather shared with me. According to him, the Duanwu Festival started as a way to commemorate the Chinese poet Qu Yuan who was driven to commit suicide by drowning himself in the Miluo River during the Zhou Dynasty. As a big advocate of the people, many of the villagers threw sticky rice wrapped in bamboo leaves into the river for fear that creatures in the water would feed on Yuan’s carcass. The sticky rice evolved into the zongzi that we eat today during the Duanwu Festival.