Foundation is the first book of Isaac Asimov’s acclaimed trilogy, published in 1951. The hit science fiction series was the recipient of a Hugo Award in 1966, claiming the title of “Best All Time Series.” Asimov was a Russian native who emigrated to America with his family at the young age of three. He studied chemistry at Columbia University and went on to get a PhD in the subject, a credible scientific interest which is certainly reflected in his writings. He later became a faculty member at the Boston University School of Medicine. Asimov produced more than two hundred works, most popularly science fiction such as I, Robot, in addition to many works of non-fiction.

Foundation drew its initial inspiration from The History of the Decline and Fall of the Roman Empire by historian Edward Gibbons, an account read twice by Asimov. Foundation is a combination of five short stories spanning about one hundred and fifty years in the interstellar Galactic Empire. Rather than trace the story of an individual hero in an isolated period of time, Foundation zooms out on the larger picture of civilization over a wide span of time and setting while touching on how forces such as technology, religion, and government all work together.

Asimov relates this concept of emphasizing the bigger picture of the world over the short-term individual to the existing cultural landscape of his own lifetime, where a strong sense of nationalism was on the rise. In particular, Asimov lived through the beginnings of the Cold War tension between Communist Russia and Capitalist America. Both countries isolated themselves from the other and pitted against each other in a head-to-head rivalry. However, Asimov favored a more global unification of this split: “To my way of thinking, the biggest obstacle to solving the problems we have…is that the world is dividing up into separate nations, all of which are more concerned over their own short-term interests than over the long-term survival of the human species. And as long as that is so, then I don’t think we will have a chance, because we will all go down the tube quarreling, so to speak” (Konstantin). Asimov supported unification over disagreement in order to promote the existence of humanity. He was also a strong liberal, a staunch opponent to the Vietnam War, and a supporter of political candidates who focused on grassroots movements as the force of change rather than bureaucratic governmental forces.

Foundation begins with an introduction of Hari Seldon on Trantor, the capitol planet of the Galactic Empire. Seldon is a dying old man who has perfected his own science coined “psychohistory.” This branch of psychology uses statistical science to predict the course of future events, and according to Seldon’s predictions, the Galactic Empire comprised of countless planets is doomed to fall within three hundred years. The data project a thirty thousand year of recovery from this fall rife with anarchy, a parallel to the Dark Ages following the fall of Rome. In response, Seldon formulates a plan to create a new civilization that will survive the fall and change the course of history, cutting the post-fall recovery period down to a mere one thousand years and emerging as the center of the Second Galactic Empire. Seldon is accused of treason for bringing his radical predictions to the government’s attention, yet cleverly negotiates a deal with the Emperor to found a new civilization of scientists on an insignificant planet called Terminus, located all the way on the outer rim of the galaxy. Terminus is created as a small community of scientists working on a scientific Encyclopedia, a disguise for its true setup of the community that will reunite the Galactic Empire in one thousand years.

The remaining four stories track the progress of Terminus in its role, in which it rises to become an all-encompassing political, religious, and economic power. The only catch is that the population of Terminus is not made aware of this plan until fifty years after its initial settlement, when a civilization is already established and there is nothing else to do but stay put and follow Hari Seldon’s plan. This is why Seldon makes intermittent reappearances in the lives of prominent and capable politicians who arise as mayors of Terminus, such as Salvor Hardin and Hober Millow. Prior to his death, Seldon had recorded short clips of himself, which can only be viewed by inhabitants of Terminus when an otherwise unbreakable Vault unlocks every few decades. The timing of these viewings chronologically lines up with Seldon’s data that predicted that Terminus would be in the midst of a major clash of internal and external crises. These “Seldon Crises” are the key points that move the Foundation along the path of rebuilding the Empire. The crises revolve around the other planets on the periphery of the Galaxy that have been forgotten by the declining Empire and left to their own barbarically independent devices.

The comparison to Rome is clear as both the Empire and Terminus were often under pressures both from without and within, which Rome ultimately collapsed from. The references to outside “barbarian” planets parallel the invading tribes that threatened the borders of the Roman Empire. Asimov projected this world far into the future with such strong parallels to likely advance a cyclical view of history in which events repeat themselves. As he said himself, “I was essentially writing future history, and I had to make it sufficiently different from modern history to give it that science fictional touch” (Seiler). The brilliant politicians constructed by Asimov, who play a main role in the resolution of each “Seldon Crisis,” do as little as possible to rectify the problems. Instead, they choose to let the course of history play out on its narrow path, making improvised moves that work around this greater sense of course.

In the context of the time period of the writing of Foundation, countries such as Russia, the United States, and Germany had all begun to play with the idea of space travel. By this point, rocket designs were being drawn and the first monkey was even launched into space in 1948. A futuristic view of spaceships was a fascinating new concept at the time, made even more appealing in its growing accessibility. Comparable technology in Foundation mirrored the rising technologies of Asimov’s time via thinly disguised names: for example, people crowded around visors in their homes, which are essentially televisions.

The first mayor of Terminus, the clever Salvor Hardin, must convince the writers of the Encyclopedia who run the planet (before being made aware of Seldon’s plan) that there is another purpose behind their civilization, and that the neighboring planet of Anacreon presents a severe threat of takeover that must be faced and overcome. He maneuvers out of the situation with his sharp insight and break from traditional means, getting Anacreon and its surrounding three kingdoms to fear Terminus, particularly its use of nuclear power, which has been absent from the periphery planets for decades. In the course of the Foundation’s history, this nuclear power is the main leverage Terminus has over the surrounding warlords of the planets. Salvor Hardin actually forms a religion around the sought after power source: “a fluffy flummery to get them to accept our science without question” (134). The barbarians on other planets see this nucleic power and science as a magical power. Therefore, on Terminus, priests are taught the way of the “Galactic Spirit” and are sent out to the periphery planets to perform their religious duties of operating the equipment, which are in essence a guise for technological power controlled by an all-knowing political force.

Technology clearly is a prominent theme throughout Foundation, particularly the role that nuclear force plays and its entwinement with religion and government. Here again, the theme of the work parallels Asimov’s own life, which witnessed this powerful nuclear force being advanced and utilized in both World War II and the Cold War. During this period of history, nuclear warfare dominated the political landscape, and countries competed for advancements that would enable them to have the military edge. The Foundation, wielding its small supply of nuclear power, therefore makes surrounding planets rely on them for power, economy, and life. The planets become dependent on power plants and technology, while citizens blindly hold fast to this since it is their religion. This pseudoreligion is nothing more than a tool of political conquest paralleling Christianity with its concepts of paradise, hell, a spirit, and even commandments. One example of this combination of government and religion is the divine kingship on Anacreon, where nuclear power allows the divinely crowned king to rise in the air with a beautiful aura surrounding him. This display is proof that he has been specially selected. Asimov’s emphasis on technology as a strong force when combined with government and religion reflects his personal belief in the prominence of technology for human existence both in his time and in the future. Asimov thought technology could be wielded for the good of society, promoting a more optimistic view than many of his science fiction counterparts.

Asimov himself was an atheist and a rationalist who believed in reason alone. Asimov was also a Humanist, philosophical view that credits humans as the guiding forces behind society rather than attributing these to a God. These beliefs led to his representation of religion in Foundation as a usefully constructed tool of government to trick the masses and exercise control. This idea reflects the views of Karl Marx, author of the Communist Manifesto, who said that religion is the “opium of the people.”

Aside from the intermingling of government and religion, another major theme of Foundation centers on the corruption of many governmental systems, which leading political figures of Foundation, beginning with Harry Seldon, exist to outwit. Indeed, mayor Salvor Hardin evades two Seldon Crises using mere improvisation and common sense. Often, the lords and kings of the planets surrounding Terminus are mocked as humorously pompous and overly extravagant with nothing very intelligent to say, and are easily outwitted by Terminus’ capable mayors. These dysfunctional reigns are marked by divine kingships, totalitarian governments, or feudal estates which employ harsh punishments reminiscent of totalitarian dictators, including assassinations to gain power and gas chambers. It seems as if Asimov’s ideal Foundation government centers on scientific progress ruled by the intellectually elite and centered in a representative democracy, as exemplified on Terminus.

The use of science as the focal point of society is reminiscent of Salomon’s House in Francis Bacon’s New Atlantis, which focused on the advancement of humans via scientific progress. Much of the scientific language employed in Foundation was also very reminiscent of “We” with its application of mathematics to human life. Here, mathematics was applied not to emotions but to broad historical concepts and events on a large scale through the statistics of psychohistory.

Foundation is a captivating story with many themes; the most fascinating of these is the interplay of technology, religion, and government. While reading this novel, the cyclical view of history presented was a reminder that the Galactic Empire is not a completely far-fetched, fictional society. Foundation is not only meant to be an outline of the past, but a reflection on modern times. Asimov poses the weighty question to readers as a takeaway: “Can we afford to take chances? Can we risk the present for the sake of a nebulous future? We must – because the future isn’t nebulous. It has been calculated” (119). 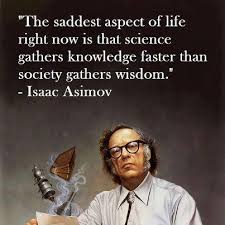