Between China & Russia engaging in germ warfare and a plague killing millions in the US (as far as we know), Dr. Robert Neville has become the last man on earth. In a flashback, we learn that Neville gave himself one of the trial vaccines after his pilot dies while they are flying.

Dr. Robert Neville believes he is living alone in the city. By day, he finds entertainment in tracking “The Family” and watching reruns of the movie, Woodstock. By night, he is holed up in his apartment, cooking dinner and speaking to a statue.

“The Family”: When people succumbed to the plague, not all of them died. There were some that became albinos. The albinos ended up being the ones who burned many of the bodies and tried to go back to simpler living. They see humanity’s downfall as science. Due to their albino skin and cultish behavior, they started to kill anyone who was not like them (even people who did not contract the disease and survived the plague).

Matthias: You are discarded. You are the refuse of the past.

Neville: You are full of crap! 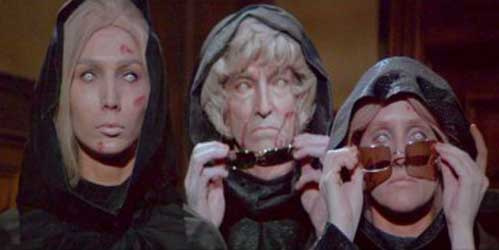 After walking around the city’s department store, Neville thinks he sees a woman. As he goes on a chase to find this person, he gets caught by “The Family” when they drop a huge wine shelf on him. Neville is brought in front of Mathias, leader of “The Family” and former news anchor. Mathias determines that Dr. Neville is guilty of murder and must be burned at the stake.

Neville gets rescued by a group of people still surviving, including the woman Lisa that he spotted earlier in the department store. Soon, Neville learns that there are a group of people who have still not contracted the virus. Just one of them, Lisa’s younger brother Richie, is slowly turning into an Albino.

Luckily, Neville realizes that he can use his blood to cure Richie. When Richie is cured, he questions if Neville would now pass along the vaccine to “The Family” so that they could also be cured. Instantly, Neville refuses and Richie takes on the mission to go convince “The Family” to work with Neville and receive the treatment. “The Family” thinks Neville sent Richie as a spy and they kill him.

In the meantime, Lisa went shopping for the day and unexpectedly succumbs to the Albino disease. She lets “The Family” into Neville’s home and they stab him. When Neville tries to escape, he (stupidly) brings Lisa with him. Mathias throws a spear and hits Neville in the chest – Neville is slowly dying but ends up living long enough to give some of his blood to the remaining humans. They drive off and it leaves the viewers wondering what will happen.

This movie was based off of the 1954 book, I am Legend. However, the movie does differ from the book although some of the premises are the same. I actually found the movie to be quite telling of the time period. This was a point in history that we discussed in class as being a time when people didn’t know if they were going to die. There was the cuban missiles crisis, the arms race with Russia, Vietnam… I guess it seemed as if the world falling apart was not such a far fetched reality.

This movie is often also credited with being one of the first to have an interracial kissing scene. Neville is played by the actor, Charlton Heston who is white and Lisa is played by the actress, Rosalind Cash who is black. They do have a love scene in the movie.

Comparing The Omega Man to Ecotopia:

Both The Omega Man and Ecotopia were made/published in the 70s. I see a link between the two in that society evolves in a distinct way due to the current realities. The Omega Man is an apocalyptic dystopia that has been created because of biological warfare and human greed. Ecotopia is created after some of the states choose to secede when they are sick of how horrible the US had become. Obviously Ecotopia is a voluntary response to their reality as opposed to The Omega Man which is the opposite.