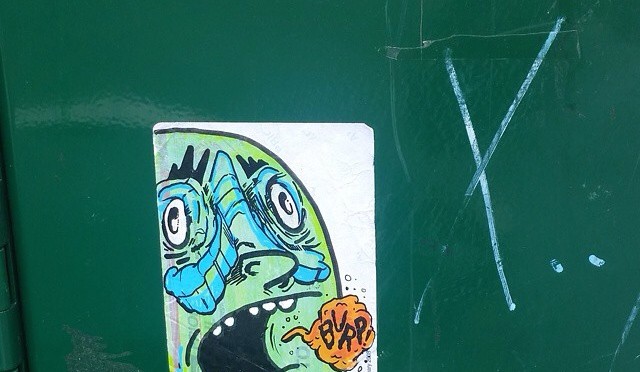 He can be found in pop-up shops and galleries all around the city. His infamous faces, containing “emotive eyes and razor sharp teeth,” as described in his website, are more than likely splattered around walls in your neighborhood. So, who is the man who has been painting the monsters around this city?

To the street art community, he is a respected street artist who goes by the names “Roycer” or “Choice Royce”, but to the rest of us, he’s Royce Bannon, a native New Yorker from Harlem. Bannon, a curator, artist, and DJ, has not just roamed around in the New York underground art scene, but rather has made it his own.  Since he was a teenager in the 1980’s he has been dabbling in the street arts, “I have always loved to paint; I started in high school,” he recollects.

Bannon is hardly alone on this journey. He exemplifies a story that belongs to many artists from New York; artists who don’t necessarily possess a huge identity in the big-time media or mainstream art world, yet still leave a lasting impression on this city.

The explosion of graffiti throughout New York City in the 1970’s was the beginning of an artistic era, which, with time, would define and shape the lives of many prominent artists today, including Bannon’s, and the art collective he is a part of, called “Endless Love Crew”. However, it was not all fun and games in the beginning, any street artist in New York can tell you that. “Yeah, getting arrested sucked; I had to learn how to be really careful,” Bannon reflects. His artwork, some legal, some illegal, has inhabited New York’s five boroughs for over two decades now.

Although, he left the life of an illegal graffiti artist behind, he most certainly did not stop creating art. “I have a few shows coming up in Philly and Boston,” he stated, “Curating is my other passion.”  Indeed this is reflected through his latest works. Just in the past two years, Bannon has curated, as well as been featured, in shows for famous street brands such as Mishka NYC and Reason. “Mishka has been collaborating with and showing the work of talented and iconic artists for years now, so it is pretty exciting to be a part of their first ever photography exhibition,” Becki Fuller, friend of Bannon’s, stated in an article about Bannon’s curatorial skills.

Additionally, he has curated dozens of independent shows in galleries throughout the city, particularly in Soho and LES, as well as studios, bars, and art events in Brooklyn and Queens. Bannon has even been involved in creating apparel, “I have designed some t-shirts for ‘Now You’re Cool’,” he stated proudly, “It’s called ‘The Roycer’.”

Recently, when Bannon wasn’t acting as photo editor of the hip-hop magazine, “The Source”, he was being featured on two episodes of the underground series, “Wild in the Streets” a compilation of short films by DEGA, documenting street artists. However, aside from the prominence Bannon has received as a successful street artist, he humbly claims his only end goal is, “to make an honest living off of my art.”