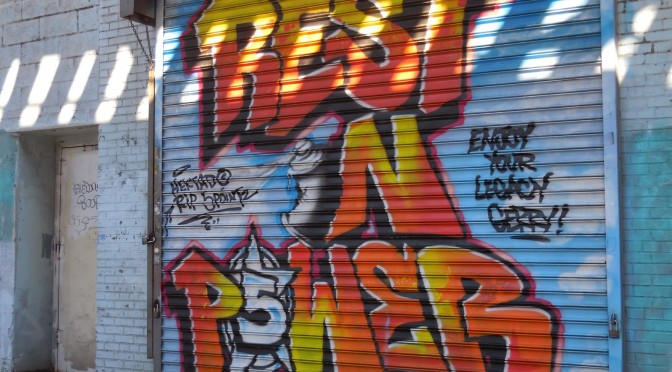 Editor’s note: In light of the nearly one-year anniversary of the guerrilla white-washing of 5 Pointz, I am doing a special article on this.

It was almost one year ago that commotion broke out on 45-46 Davis Street, due to the guerrilla whitewash of the iconic 5Pointz building for the purposes of building a $400 million development project. This outdoor art exhibit lived a life of 12 years as the only legal aerosol outlet in New York City, displaying mural pieces all around the 200,000-square-foot factory building.

However, it was only this past August that Jerry Wolkoff, the site’s developer and owner since the 1970’s, began demolition to erect the two giant condominium towers. The demolition plan was approved by city council last october, and detailed the resurrection of 210 affordable housing units in its place. Blogger Jeremiah Moss has been documenting the demolition on his website, VanishingNewYork.com.

Establishing L.I.C. as the graffiti Mecca of the world, 5Pointz not only attracted artists from around the globe but several musical artists as well, including Doug E. Fresh, Kurtis Blow, Grandmaster Kaz, Mobb Deep, Joan Jett, and Joss Stone.

Jonathan Cohen, also known as “Meres One”, the curator for 5Pointz from 2002-2013 stated in an interview, “It conveys the pure essence of hip-hop that New York is all about, on any given day you can see painters from all over the world, break dancers, and emcees just doing their thing.”

Aside from receiving international acclaim, it held a dear place in New Yorker’s hearts, with the name itself symbolizing the 5 boroughs coming together to an epicenter of art. There were even last-minute attempts to win landmark status for 5Pointz, with a petition being provided on its website.

As the one year anniversary of 5 Pointz death rolls around, so do reactions from New Yorkers. “I used to hang out there as a young teenager, it was the greatest place to me.“ Said Bushwick street-artist Nase, 23,  “The 5Pointz situation really identified a bigger issue of many neighborhoods in New York losing their luster due to gentrification.”

The on-going issue of gentrification in Long Island City has remained widespread and unsettled for years. On one side of the argument lies the belief that gentrification can prove to be detrimental to a neighborhoods culture, whereas on the other that it is increasing property value and making the neighborhoods residentially more appealing. Williamsburg, Chinatown and Harlem are prime examples.