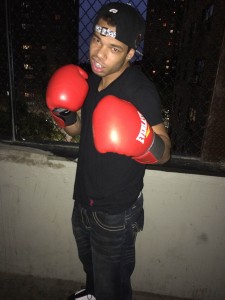 Malik Rodriguez, an ambitious 23 year old Marine with big expectations for himself when he steps into the ring, but these aren’t the bright lights in an area, more like the street lights in a neighborhood. “I got started by literally just walking in and asking to fight,” referring to his first appearance at BX Fight Club, a new underground set of boxing matches, where the location is not disclosed publicly, attending one of these events are not based on what you know, but who you know.  Sometimes it may be held in a park, maybe in a parking lot, locations vary, but the police have the discovered the unsanctioned event before and shut it down. ‘You have to know somebody to get the address” Rodriguez said, “My friend invited me and he only knew about it through his friend.”

He was not paid for any of his matches at the Bronx fights but admitted that some fighters were compensated for winning tournaments whether it be in prizes or cash. However, these underground matches in the Bronx league were not the first time he laced up some leather gloves. Rodriguez got his first real start at “Friday Night Throwdown,” another underground league, slightly better known and more established than the BX fight club. “ I was drunk and got into a lot of fights, then one day I got invited to FNT, found out I can drink and fight and get paid, I loved it,” he recalls while laughing,” then eventually I got serious with it.”

He remembers his first fight with the leagues prized possession, an undefeated fighter in both amateur and underground, his name was Rockstar Charlie. ‘Charlie was beating everybody, then I came in, I was a little drunk, but I came the closest to beating him, so they were telling me I had to come back.” After being invited back, he was told to bring some people, “So I brought guys from my neighborhood, and that was when a magazine company came to the event, they found out Charlie was a model, and that’s how it eventually became Models VS Fighters.”

He has usually trained almost every day at El Barrio Gym on East 115th street. Although he considers FNT fun and more of a party, he trains seriously with aspirations of becoming a profession boxer, ‘I’m actually going to try and go to the next Golden Gloves, then try and go pro.”