Hymn to the Aten

The Great Hymn to the Aten

Adoration of Re-Harakhti-who-rejoices-in-lightland In-his-name-Shu-who-is-Aten, living forever; the great living Aten who is in jubilee, the lord of all that the Disk encircles, lord of sky, lord of earth, lord of the house-of-Aten in Akhet-Aten; (and of) the King of Upper and Lower Egypt, who lives by Maat, the Lord of the Two Lands, Neferkheprure, Sole-one-of-Re; the Son of Re who lives by Maat, the Lord of Crowns, Akhenaten, great in his lifetime; and his beloved great Queen, the Lady of the Two Lands, Nefer-nefru-Aten Nefertiti, who lives in health and youth forever. The Vizier, the Fanbearer on the right of the King . . . Ay; he says:

Splendid you rise in heaven’s lightland,

When you have dawned in eastern lightland,

You fill every land with your beauty.

You are beauteous, great, radiant,

High over every land;

Your rays embrace the lands,

To the limit of all that you made.

Being Re, you reach their limits,

You bend them for the son whom you love;

Though you are far, your rays are on earth,

Though one sees you, your strides are unseen.

When you set in western lightland,

Earth is in darkness as if in death;

One sleeps in chambers, heads covered,

One eye does not see another.

Were they robbed of their goods,

That are under their heads,

People would not remark it.

Every lion comes from its den,

All the serpents bite;

As their maker rests in lightland.

Earth brightens when you dawn in lightland,

When you shine as Aten of daytime;

As you dispel the dark,

As you cast your rays,

The Two Lands are in festivity.

Awake they stand on their feet,

You have roused them;

Their arms adore your appearance.

The entire land sets out to work,

All beasts browse on their herbs;

Birds fly from their nests,

Their wings greeting your ka.

All flocks frisk on their feet,

All that fly up and alight,

They live when you dawn for them.

Roads lie open when you rise;

The fish in the river dart before you,

Your rays are in the midst of the sea.

Who makes seed grow in women,

Who creates people from sperm;

Who feeds the son in his mother’s womb,

Who soothes him to still his tears.

Nurse in the womb,

To nourish all that he made.

When he comes from the womb to breathe,

On the day of his birth,

You open wide his mouth,

You supply his needs.

When the chick in the egg speaks in the shell,

You give him breath within to sustain him;

When you have made him complete,

To break out from the egg,

He comes out from the egg,

To announce his completion,

Walking on his legs he comes from it.

How many are your deeds,

Though hidden from sight,

O Sole God beside whom there is none!

You made the earth as you wished, you alone,

All peoples, herds, and flocks;

All upon earth that walk on legs,

All on high that fly on wings,

The lands of Khor and Kush,

The land of Egypt.

You set every man in his place,

You supply their needs;

Everyone has his food,

His lifetime is counted.

Their tongues differ in speech,

Their skins are distinct,

For you distinguished the peoples.

You made Hapy in dat (the Netherworld),

You bring him when you will,

To nourish the people,

For you made them for yourself.

Lord of all who toils for them,

Lord of all lands who shines for them,

Aten of daytime, great in glory!

All distant lands, you make them live,

You made a heavenly Hapy descend for them;

He makes waves on the mountains like the sea,

To drench their fields and their towns.

How excellent are your ways, O Lord of eternity!

A Hapy from heaven for foreign peoples,

And all lands’ creatures that walk on legs,

For Egypt the Hapy who comes from dat.

Your rays nurse all fields,

When you shine they live, they grow for you;

You made the seasons to foster all that you made,

Winter to cool them, heat that they taste you.

You made the far sky to shine therein,

To behold all that you made;

You alone, shining in your form of living Aten,

You made millions of forms from yourself alone,

All eyes observe you upon them,

For you are the Aten of daytime on high.

You are in my heart,

There is no other who knows you,

Whom you have taught your ways and your might.

Those on earth come from your hand as you made them,

When you have dawned they live,

When you set they die;

You yourself are lifetime, one lives by you.

All eyes are on your beauty until you set,

All labor ceases when you rest in the west;

When you rise you stir everyone for the King,

Every leg is on the move since you founded the earth.

You rouse them for your son who came from your body,

The King who lives by Maat, the Lord of the Two Lands,

The Son of Re who lives by Maat, the Lord of crowns,

Akhenaten, great in his lifetime;

And the great Queen whom he loves, the Lady of the Two Lands, 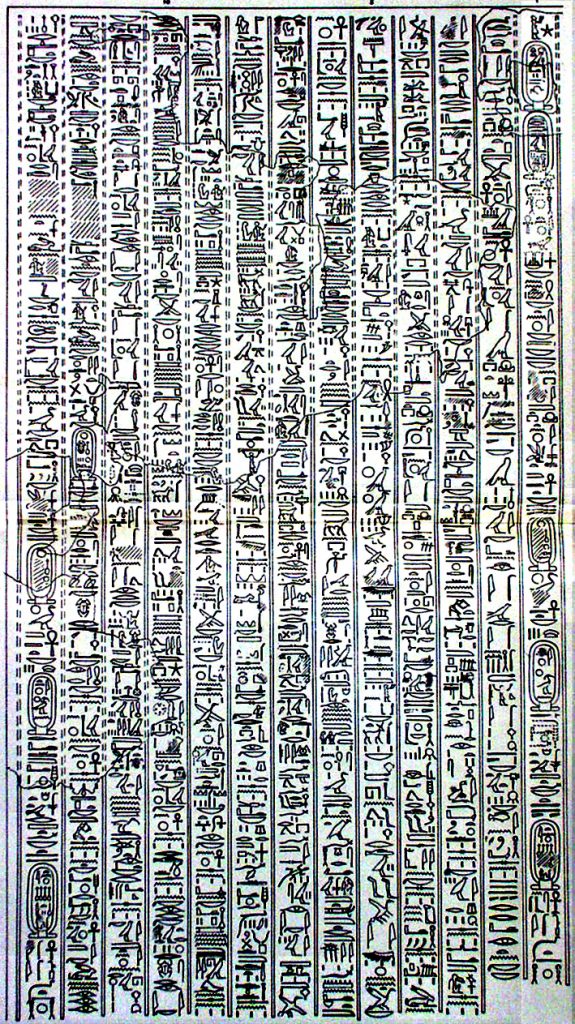 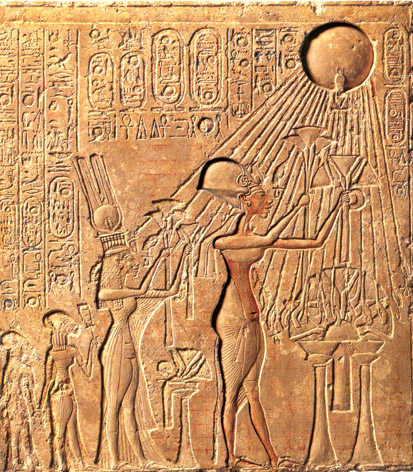