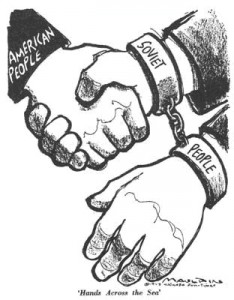 Spreading American values and culture has always been the goal of the nation since the very beginning of  World War I. This interest in spreading democracy and later on encouraging a capatilistic world, helped to fuel both WWII and the Cold War. In this attempt to make the world more safe for democracy to exist, the U.S. started its own battle with communism. Additional efforts extended a helping hand to European nations which desperately needed the help after falling apart post Cold War.  Examples supporting this are the Truman Doctrine and the Marshall Plan. This informally changed American foregin policy in regrard to the U.S.S.R. No longer was the U.S. trying to build relations with the nation or suggest friendship (detente), but rather preferred a policy of containment of the U.S.S.R’s expansion.

How did the Cold War start? Who started it and for what reason it was fought are all questions which are important, but can all pretty much be answered by one word: containment. The fear of the spread of communism as the U.S.S.R expanded posed a direct threat to the U.S. In accordance with American ideals and capitalism, a world with safe choice of communism would possibly even create an uproar in the U.S. as well. In order to prevent this from happening, American foreign policy in Europe changed quickly.

The Marshall Plan was ratified in 1947 to help rebuild Europe after WWII. This Act was also meant to prevent communism from spreading and gaining control in war torn countries. The Marshall Plan had a huge effect on Europe in which it assisted in Europe’s economic growth and recovery. This soon led to trade relations with the U.S.  If U.S had not put the Marshall Plan into effect, it may have caused a delay in Europe’s economic recovery. Another effect may be that Communism would not be contained and it might have spread and taken control over war torn countries.