After world war II, the world emerges to two great superpowers. With one side in mostly Asia and Europe-the USSR and other side in the Americas-USA. USSR were spreading communism all over the world, including countries like Germany, China, Veitnam, Cuba, Korea and more. As USSR influenced its neighboring countries rapidly, USA stepped into the regime, trying to stop the spread of communism by using the Containment strategy.

USA was able to fight back in a demoncratic form in korea,Veitnam and Germany to prevent communism domination. If USA didn’t intervene, East and West Germany may be unified as a communist country. North Korea and South Korean may also be unified as a Communist country. USA played major role in keeping communism from widespread around the world, unfortunately, they failed to put Vietnam to unify as a demoncratic country.

This picture depicts a clear scenario of how JFK was battling against khrushchev while they both sitting on nuclear weapons, alerting everyone that there might be a nuclear war. It clearly showed the tension between USSR and USA when USA tried to contain the widespread of communism.

After WWII concluded, peace did not last very long. Tension began to grow between the two superpowers as the Soviet Union began to establish communist governments in eastern European countries. The Soviets began to spread their communist beliefs around the world. The United States reacted to this situation by implementing the “Containment Policy” to prevent the spread of Communism.

I believe if the Containment policy was not put into affect, the world would be a very different place. The United States might not have interviened in Vietnam and communism may had spread throughout south east Asia. If there was no Containment policy, the United States may not have assisted South Korea during the Korean war and the entire peninsula may have been taken over by the Communist party. 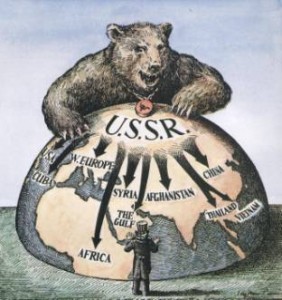 The Marshall Plan was ratified in 1947 to help rebuild Europe after WWII. This Act was also meant to prevent communism from spreading and gaining control in war torn countries. The Marshall Plan had a huge effect on Europe in which it assisted in Europe’s economic growth and recovery. This soon led to trade relations with the U.S.  If U.S had not put the Marshall Plan into effect, it may have caused a delay in Europe’s economic recovery. Another effect may be that Communism would not be contained and it might have spread and taken control over war torn countries.

In 1961, the United States enters the Vietnam War allied with Southern Vietnam to fight off the communistic Northern Vietnam. The United States wanted to contain and stop communism from expanding. This later goes in history as America’s first loss in a war.