How to find Honors courses 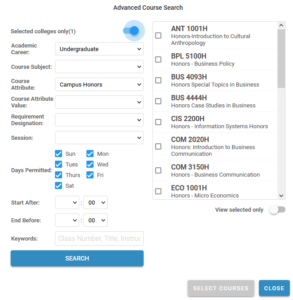 JRN 3650/3650H: Storytelling in Film: Writing for Film and Television with Sam Pollard

*Scholars should request permission to enroll into the honors section so it can be applied towards their requirements.

The Spring’23 course will be taught by Sam Pollard, Emmy award-winning filmmaker and alumni from Baruch College in 1973. He is the very first Harman Writer to be a Baruch alum; with over forty years Pollard has worked extensively in film editing, directing, producing and screenwriting, and is lauded for his work in documentary films. Along with aforementioned Emmys, he has been nominated for an Academy for the film 4 Little Girls with filmmaker Spike Lee. Pollard has also won a Career Achievement Award presented by the International Documentary Association and a Peabody Award for “chronicling the Black experience and illuminating complicated historical figures across film and television.” His most recent film, Citizen Ashe, was released last year.

If you are interested in watching one of Pollard’s documentaries, MLK/FBI is available for Baruch students through the Newman Library.

To register for this course, students must submit an application. See Spring 2023 course flyer.

1) For the capstone requirement for the minor in Environmental Sustainability, student must have completed two 3000-level courses in the minor.

This course explores the role journalism plays in calling the world’s attention to climate change—arguably the most important story of our time, but one that often falls off the front pages as other stories dominate the news cycle. Students will examine the intersection of science and storytelling and discuss the multitude of ways journalists across all types of media can approach climate coverage, from local New York stories about climate change adaptation to international reporting on green investments and climate migration. Students will obtain a deeper understanding of climate change science and develop the skills needed to communicate science to the public making it accessible, relatable, and actionable. The course will include guests speakers and field trips. Students enrolled in the Honors section (IDC 4010H) must complete additional course requirements. Learn more.

Prerequisite: ENG 2150, junior or senior standing, 6 credits in the humanities (preferably a base course in each of the disciplines of the course), a minimum 3.4 grade point average, and permission of the director of the Feit Seminar Program. To request permission, email Prof. Michael Staub, Director, Feit Interdisciplinary Seminar Program.

For the complete list of ‘H’ Courses, use Schedule Builder in CUNYfirst. You can also view descriptions for all classes here.

Can I request an override to get into a Macaulay Seminar?

No. We are unable to overtally students into Macaulay Seminars, except for academic reasons, i.e., your course requirements prevent you from taking an open section. You may need to rearrange your schedule. Exceptions are not considered for schedule preferences or work schedules. Speak to your Honors advisor if you are unable to take a required course due to your Macaulay seminar section time. Your Honors advisor can assist you in choosing options that work for you.

See eligibility requirements and process to request to Contract Honors for a non-Honors course (by special exception, for liberal arts and public affairs students only.)