We’ve all seen old photos and films of the Lower East Side at the turn of the 20th century: the teeming masses of  immigrants struggling to adjust to a strange new life in America. 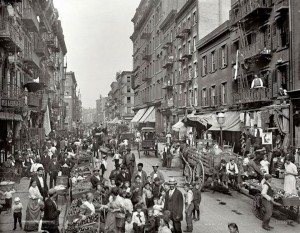 Their travails in sweatshops and factories was well chronicled. Tragedies like the horrendous 1911 fire at the Greenwich Village blouse factory known as the Triangle Waist Company that cost the lives of 123 women and 23 men made international headlines.

In 1916 the New York Bureau of Municipal Research decided to investigate this question. 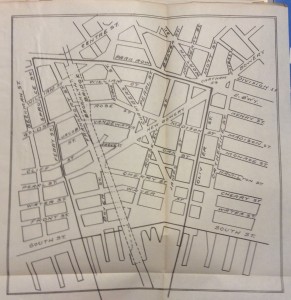 The study, a very thorough affair, was seeking to discover what the adults and children of the neighborhood did inside and outside the home and what forms of entertainment were available to them. The plan of attack consisted of 38 different assignments, with data collected either through onsite observations, interviews, questionnaires, or good old fashioned shoe-leather research of available city data.

When creating the assignments, the Bureau noted the data to be collected,  the source and how it was to be used. For instance, one of the desired data sets was the length of a workday for a worker and what time he or she went home. The data would be used to indicate the amount of time that people had available for recreation. The source of the data would be a questionnaire. 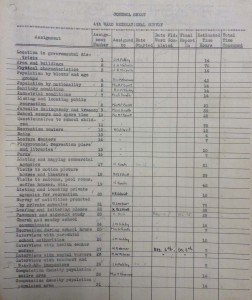 The easiest assignments involved researching the census and other published data readily available through City Hall or public libraries. Through them the Bureau was immediately able to ascertain such things as population density of the neighborhood, which stood at an average of  245 persons per acre (although the density ranged widely from 98 per acre south of Chambers Street to 383 north of it.) Of the entire population residing there, statistics also showed that 16% were illiterate.

The study required members of the Bureau to blanket the neighborhood to uncover all available options for recreation. Churches, dance halls, clubs, even health centers were scoured to find out as much information as possible. The researchers sought a wealth of information: including reputation of the venue (usually established by asking the officer on the beat), its hours and the type of drinks available. 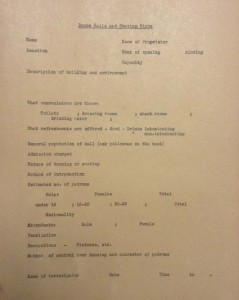 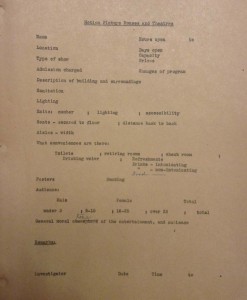 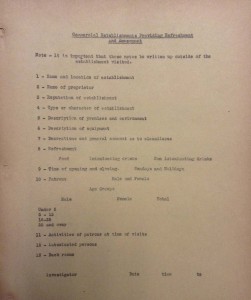 Even children inside the schools were not safe from the prying inquiries of the Bureau men who created a 43-question questionnaire for children to fill out. As an incentive, children got school credit for their efforts. “By arrangement with principals and teachers part may be substituted as classroom work in English.” The questions covered almost all aspects of the children’s lives and included such questions as “What is the name of your gang or club?” 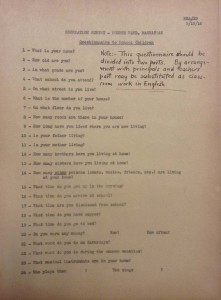 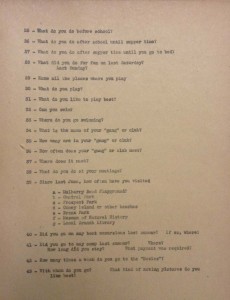 The resulting reports from field work painted a rather stark picture of the recreational options available to the residents of the Fourth Ward. In a report with the provocative title “What Would You Do Without Money?” Morris R. Werner, a staffer who was assigned to interview nurses, wrote:

“As soon as a man gets home from work, which is in the average case about seven-thirty in the evening, he doesn’t call for his slippers, as English novelists are in the habit of making their characters do, but he sits down at the table with his wife and children and eats. He usually prays before he eats, but he eats. Then the family reads the one newspaper which the head of the family has bought. As the families are for the most part Hebrew in their faith in the Fourth Ward of the City of New York, the Jewish papers have a tremendous circulation. ”

Any entertainment to be had was to be derived outside the home – in parks or in Coney Island during the summer. Werner pessimistically noted that the wages of the people were so low that they “cannot even buy a copy of the New Republic.”

He ended the report almost apologetically that he could not say more on the recreation available in the home.

“… there is very little to tell about home recreation, since the occupants of the home get out of it as soon as they can, or go to bed as early as they can. The women get no time at all for recreation, because they have to earn a living, cook, and take care of the children. The children go to school, play on the streets, and use the libraries, and the Educational Alliance. The young people people work, use the libraries, use the streets, and go to bed. The adults work, read, and go to bed.” 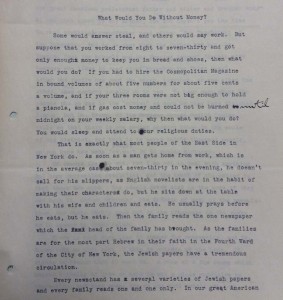 Many of his conclusions were seconded in another field report by Howard W. Palmer who wrote “Although abject poverty does not prevail in the district known as the Old Fourth Ward, yet the home conditions are such as to make it practically impossible to get any recreation within the home.”

The average family, Palmer discovered, had six children living in what usually amounted to no more than three rooms. Overcrowding made home activities all but impossible, forcing families to seek recreation outside the home.

His research also indicated a severe lack of playgrounds, so much so that until a child turned 14 he or she almost never went more than a block and a half to play. Playgrounds were so small that they could barely accommodate the children living in their immediate surroundings. A child living even a few blocks away would have no chance of finding an available spot.

And guess what? The problem is still with us.

2 thoughts on “Fun and Games in Olde New York”