Luther Gulick spent much of 1936 working with two colleagues as the President’s Committee on Administrative Management (“the Brownlow Committee”) to reorganize the federal government.

There was little doubt reform was sorely needed. Virtually every federal entity reported directly to the Roosevelt White House, making for an administrative nightmare. 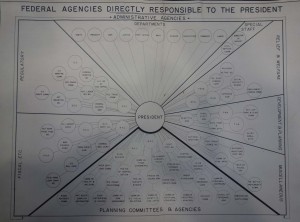 Gulick and colleagues came up with a five-point program: give the President six top assistants to work with the federal agencies; strengthen the budget office and personnel services; professionalize and expand the civil service; consolidate the more than 100 various agencies, boards, commissions etc., into 12 major departments; and create an independent Auditor General who would monitor expenditures and keep the Executive accountable to Congress.

As it was, Congress, alarmed at the dictatorial excesses across the globe and fearful of adding to Roosevelt’s already sweeping powers, bridled at passing many of the changes Gulick & Co. advocated. The first reorganization bill failed, and when a version finally passed in 1939, it contained few of the measures the President and Brownlow committee had sought. But undaunted, FDR used his executive authority to implement them anyway. By that time, the war clouds were so ominous, Congress made little objection.

Even with so many big issues to grapple with, Gulick typically found time to track down and write an anonymous correspondent for what was then called News-Week magazine (articles at the time carrying no bylines) in praise of his “very intelligent article” on the reorganization. He turned out to be Edward Ware Barrett, later chief of the overseas news and features division of the Office of  War Information, and still later, Dean of the Columbia University Graduate School of Journalism (when this blogger attended in the 1960s — small world department.) 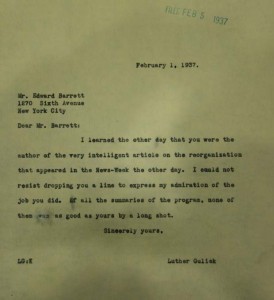 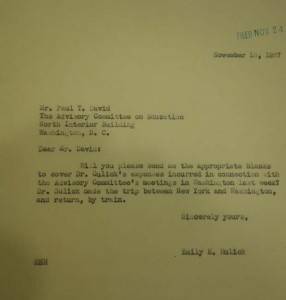 Gulick was soon caught up in a new bureaucracy that required work-related federal travel to be paid by Works Progress Administration vouchers. 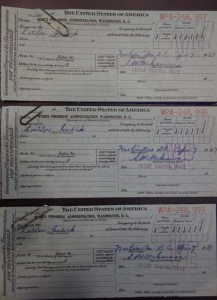 And, by the way, did anyone catch the name of Gulick’s secretary?

Emily E. HULICK! How weird is that?