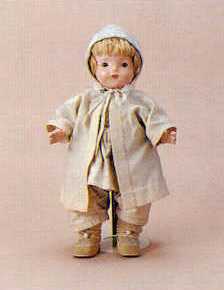 Hi, I’m Blossom. Or should I say, konnichiwa? That’s Japanese for hello. I’m a friendship doll. In 1927, I was one of 12,739 American dolls sent to Japanese children as a good-will gesture. Talk about timing! In return, Japanese children sent 58 elaborately costumed Japanese dolls to America. 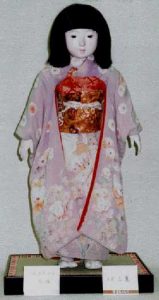 The doll exchange was a prize project of the Gulick family, specifically Luther’s father, Sidney Lewis Gulick, who was a missionary in Japan — Luther was actually born there in 1892 — and never lost his love for Nippon, even after Pearl Harbor (which put him under an F.B.I. cloud, as you might imagine). During the war, American dolls in Japan had to be elaborately hidden — discovery could subject their owners to death!

Today, the story is being preserved by Sidney’s grandson, Denny — his father was Sidney’s last son (and Luther’s brother) Sidney Jr., which makes Denny a nephew of Luther’s. We met Denny and his wife, Frances, math professors at the University of Maryland, at a talk we gave on Luther Gulick last October at the George Washington University. https://blogs.baruch.cuny.edu/ipaprocessing/2016/10/spreading-the-word-the-word-is-gulick/

Since then Denny, and Luther’s grandaughters Lisa and Leslie, have augmented our Gulick collection with donations of  important family letters and other memorabilia, including records of the Dolls of Friendship. 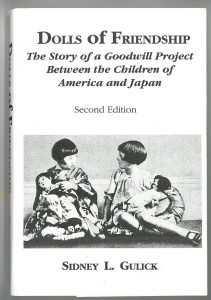 Here’s Sidney L. Gulick and his wife, Cara Fisher Gulick, with the Japanese Ambassador and his wife at a presentation of Japan dolls in 1927: 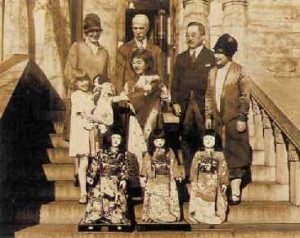 Dr. Gulick took it seriously enough to equip each doll traveling to Japan with a letter of greeting to her new Japanese family: http://wgordon.web.wesleyan.edu/dolls/exch1927/recjapan/gulickletter.htm

Here’s a good synopsis of the story: http://www.bill-gordon.net/dolls/exch1927/gulick/index.htm

Look Japan wrote up the story in 1995: http://wgordon.web.wesleyan.edu/dolls/media/magazine/lookjapan.htm

Valparaiso University in Indiana mounted a museum exhibit on the dolls as recently as 2015: http://www.valpotorch.com/arts_and_entertainment/article_aaadd7d8-58cb-11e5-9890-e3d039049e7b.html

President John F. Kennedy was a proud recipient of Japanese friendship dolls, and his daughter, Caroline, President Obama’s Ambassador to Japan, played with them as a child. http://www.japantimes.co.jp/news/2017/01/18/national/politics-diplomacy/caroline-kennedy-bids-fond-farewell-to-japan/

The Gulicks never lost their warm feelings for Japan and its dolls. Today, Denny’s daughter Sharon keeps the flame of friendship burning. http://wgordon.web.wesleyan.edu/dolls/otherprog/gulick/sharon/index.htm