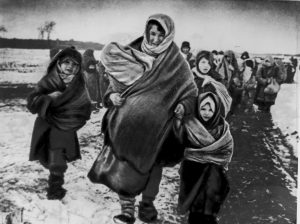 There was a time, believe it or not, when America’s leaders and the rest of the free world cared about the hungry and homeless. It was called World War II. While engaged in a life and death struggle against intractable enemies on two fronts on opposite sides of the globe, the U.S. still mobilized a colossal rescue effort to feed, clothe and shelter some half a billion people from Spain to North Africa to China. In history’s darkest time, it was truly humanity’s finest hour. Today, with 11 million people displaced in Syria alone and more than 50 million other refugees fleeing war, terrorism and natural disasters  in Iraq, Afghanistan, Somalia, Yemen, South Sudan, Nigeria and other ravaged lands, a far more prosperous world seems paralyzed with inaction.

Can history teach us anything?

We find inspiration in the epic relief effort chronicled in the Baruch College Newman Library Archives IPA Collection and Luther Gulick Papers. Gulick, who wore no end of hats for the government going back to the Woodrow Wilson Administration, was working on defense production for FDR’s wartime White House when he was tapped for a vital new role under former New York Governor Herbert H. Lehman.

On Nov. 21, 1942, less than a year after Pearl Harbor, with Allied prospects looking exceedingly grim in the face of the Axis onslaught, Roosevelt created the Office of Foreign Relief and Rehabilitation Operations (OFRRO). He put it under the State Department with Lehman in charge. Lehman, of the investment banking family, had been Roosevelt’s Lieutenant Governor before succeeding him in the state house and winning re-election three times. 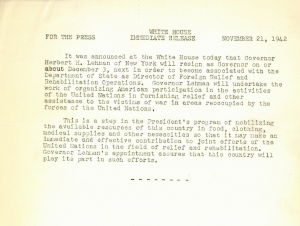 The origins of the relief effort went back more than a year to September, 1941 –before the Japanese attack plunged America into the two-year-old war — when the State Department’s Special Research Division began studying the need for a worldwide relief program. On July 23, 1942, Secretary of State Cordell Hull  — confidently looking ahead to peace in the darkest days of the war  — broadcast the program’s aims worldwide:

With victory achieved our first concern must be for those whose sufferings have been almost beyond human endurance. When the armies of our enemies are beaten the people of many countries will be starved and without means of procuring food; homeless and without means of building shelter; their fields scorched; their cattle slaughtered; their tools gone; their factories and mines destroyed; their roads and transport wrecked. Unknown millions will be far from their homes — prisoners of war, inmates of concentration camps, forced laborers in alien lands; refugees from battle, from cruelty, from starvation. Disease and danger from disease will lurk everywhere. In some countries confusion and chaos will follow the cessation of hostilities. Victory must be followed by swift and effective action to meet these pressing human needs. 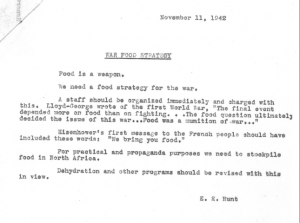 The crisis was indeed horrific, as a 1942 Red Cross report on the French internment camps revealed. Inmates, many of them Jews, were classified as starving, pre-starving and endangered. 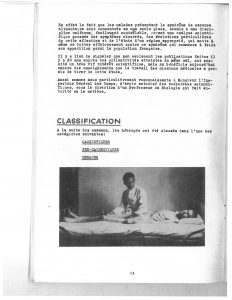 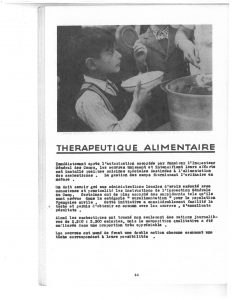 OFRRO’s objectives were to prevent unrest and epidemics among liberated civilians; create conditions in the liberated areas for “effective psychological warfare” against the enemy; demonstrate the humanitarian purpose and values of the people of the United States [emphasis added]; and restore local production of food and other necessities to end the drain on American resources. There was an acknowledged selfish commercial motive as well: speeding “the recovery of our best peacetime customers.” American planners were also coldly realistic, aiming simply to keep people from dying.  “OFRRO is not concerned with raising the living standards of liberated people back to their pre-war levels or with reforming the social system or habits and standards of any land.” [Emphasis in the original].

Gulick, who had known both Roosevelt and Lehman from their Albany days and had been instrumental in reorganizing the executive branch in the New Deal, was chosen to head OFRRO’s  Division of Program and Requirements. Characteristically, he had quickly gotten to work, trying to figure out what kind of agency theirs would be in the alphabet soup of Washington wartime bureaucracy. 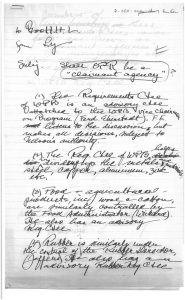 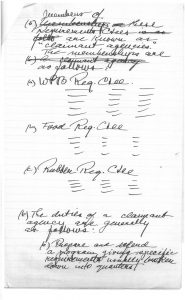 To complicate things, the American efforts needed to be coordinated with British counterparts through a range of combined committees. Gulick, with his penchant for charts, tried to diagram it: 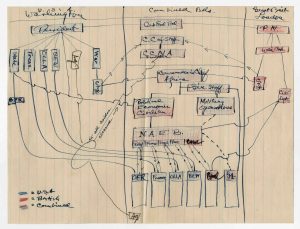 As director of a critical arm of the relief effort, his job was to study the needs in food, clothing, shelter, medicine, engineering, transport and community services and figure out ways of supplying them. The list included canvas for sails for Greek fishermen, newsprint for the Sicilian press, women’s sanitary supplies, sewing machines, farm tools, seeds, safety matches, motorcycle parts, lighting, cigarette paper and a myriad of other necessities. 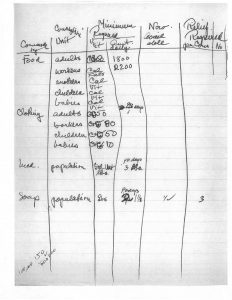 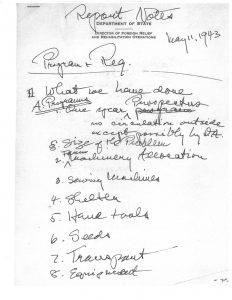 In early January 1943 (although he misdated his letter as 1942, a common new-year error), he reached out to an old ally, President Nicholas Murray Butler of Columbia University where Gulick had begun his public administration training. He was looking to recruit “a small group of top American administrators who will be assigned to the foreign theaters of operation” and he was hoping to poach some from his post-graduate alma mater, in case Butler needed to plan his faculty needs around that.

By April, 1943, OFRRO had a staff of 120 toward its goal of 200. But on top of the daunting mission, Gulick and other planners struggled with logistical problems at home. Just finding housing in wartime Washington was an ordeal, as a letter to Gulick from Carl Shoup shows. Shoup, an illustrious  Columbia University economist had paired with an eminent colleague, Roy Blough, to produce a six-volume landmark study of American taxes and potential reforms, and Shoup would later design a new tax system for occupied Japan under General MacArthur. But in April 1943, Shoup was just another expert looking for quarters in the nation’s capital, beseeching Gulick for word “of anyone who is giving up a small apartment or who would want to share an apartment…”

Despite his workload, Gulick found time to address the Quakers’s annual meeting in Philadelphia in March 1943 and excerpt his remarks in a lengthy article for the group’s  magazine, Friends Intelligencer, laying out his challenges and methodology. The relief task, he wrote, “will be done well or ill precisely in proportion to the freedom from institutional ambition with which the work is inspired from beginning to end.” In other words: egotists need not apply. He divided his subject into three parts — what to expect abroad, what to expect at home, and what the government was doing.

“What shall we find when our allied armies grind forward and liberate Europe, China, the Philippines, and the Dutch Indies?” he wrote. “On this we do not have to guess.” The enemy, he said, was determined to loot, pillage and destroy. “The great passion everywhere will be for food.” At home, the challenge would  be to gather the relief supplies and find ways, amid the military priorities, to transport them abroad. Amid the fighting, a civilian army had to be raised to deliver and distribute the supplies. And then there was politics. The American people were generous but would hardly tolerate blunders in the diversion of scarce resources to help far-away victims. As for the government’s commitment, it was steadfast and sacred, Gulick assured his readers — “the most profound spiritual cause to which mankind has ever dedicated itself.”

The vast scope of the effort emerges in files of the Gulick papers. OFRRO was barely organized in November 1942, when the Interdepartmental Committee on Food Relief proposed assembling a reserve of six million tons of food to supply a subsistence diet of 2,000 calories a day to 30 million people, at a cost of $1.2 billion — about $18 billion today. The budget for the needs of liberated people for the program’s first year was put at $2.35 billion — about $33 billion today.

By 1943, Gulick’s division had put together a “HUNGER MAP OF EUROPE.” It showed that except for Britain and Sweden and possibly Switzerland, “no people in Europe are now receiving an adequate diet.” Germans were believed to be the best fed, at 1850 calories per person per day. But Greeks were subsisting at less than a quarter of that, 450 calories a day. Polish Jews, if they were alive at all, were suffering with even less.

The needs were staggering. In Europe alone by April of 1943, almost 332 million people were under the Nazi and Fascist yoke; in the Far East another 184 million were under Japanese occupation. 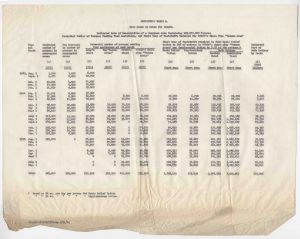 In September 1943, with the tide of battle turning in favor of the Allies and the liberated regions with their millions of war victims spreading, Roosevelt invoked his executive authority to fold OFRRO, along with Lend Lease Administration and the Office of Economic Warfare into a new agency, the Foreign Economic Administration under the White House Office for Emergency Management.

But two months later, the foreign relief task had become so overwhelming it was handed off, still under Herbert Lehman, to a new international entity, the United Nations Relief and Rehabilitation Administration. Gulick too was retained (at a salary of $8,000, about $113,000 in today’s dollars) as secretary of Committee IV, Relief and Rehabilitation Policies, under a chairman from China and vice chairman from Uruguay. UNRRA held its first session at Atlantic City in November 1943, declaring, “America alone cannot feed all the victims of war from its own resources, neither can Britain nor Russia not China nor any of the American Republics.” 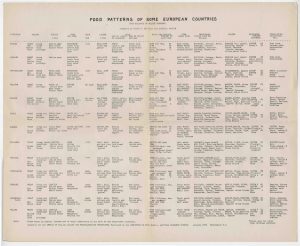 But the world, it turned out, could, and can.  It requires will and compassion and know-how — the expertise of people like Luther Gulick who didn’t sneer at government but devoted his career to studying how it worked and how it could be used to benefit humanity.

One thought on “When America Fed (and Led) the World…”